Behind the Scenes: Soar Aviation 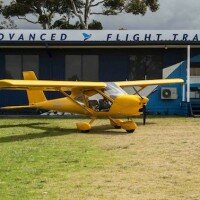 Training to become a pilot is one of the biggest steps a person can ever make, because it’s the beginning of the realisation of a lifelong dream to fly. The first time you take hold of the controls of a plane is an indescribably wonderful feeling that will never be forgotten, and the sense of achievement that follows is life changing.

When it comes to such a monumental event, it’s important to go with the best training school in the business, and that’s where Soar Aviation comes in. They’re one of Australia’s leading flight schools, and are a truly forward-thinking and innovative company that has helped pilots from across the country reach for the skies.

Soar Aviation founder Neel Khokhani had one major concept in mind when he created the company, and that was to be different. He knew there was a better way of teaching students, and set about tackling flight training from a slightly different angle.

Khokhani realised too many aviation businesses had no real point of difference, and merely followed standard training schedules and practices without flair or personality. With this in mind Soar Aviation was created with the philosophy of trying to do things in the most cost efficient and easiest way possible, in order to allow the widest range of people to experience the joy of flying, whilst still delivering the highest quality product on the market. The team aims to take advantage of developments in technology and advancements in aircraft to keep their customers happy.

With more 100 years combined experience in the aviation industry, the highly qualified team at Soar offer the highest standard of personalised flight training and guidance, and are there to guide everyone from complete rookies who have barely left the ground, to winged warriors looking to grow their knowledge, experience, and qualifications.

With a fleet of modern aircraft that are perfectly suited to developing skills – including the Foxbat A22, Aquila A210 and A32 Vixxen – students are assured of having every advantage when it comes to becoming the best pilot possible. Over the past five years, they have built up to a team of over forty instructors, over twenty support staff, and a cutting edge, modern fleet of over thirty aircraft.

Soar Aviation has seen huge growth in that time, and now operates in Melbourne and Sydney with further expansion in the pipeline. This success is just reward for the hard work of those behind the scenes and in the air. 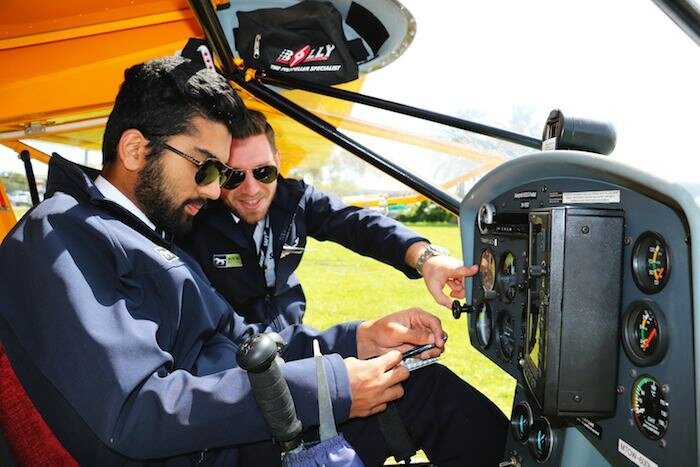 HUMBLE BEGINNINGS
Soar Aviation’s CEO Neel Khokhani fell in love with flying at a young age, and wanted to share his passion with as many people as possible. However, he was troubled by the lack of innovation in the flight training industry.

Seeing phenomenal developments in aviation all the time, with the growth of airlines, the development of new technology and improvement of safety, efficiency and sustainability left him questioning why, when it came to smaller aircraft – the planes used for training the next generation of pilots and aviation enthusiasts – innovation seemed to have ground to a halt.

Not only was innovation an issue, but for too long those who had dreamed of becoming a pilot were forced to put their passion for aviation on the backburner because of the imposing costs associated with learning to fly.

“Whilst working as a Flight Instructor, most aspiring pilots I had spoken to believed becoming a pilot would cost an arm and a leg,” Khokhani explains. “Through speaking to students and observing how flight schools operated, I came to realise that with newer, more fuel-efficient engines and sustainable business practices, the cost of flight training could be drastically reduced, making it much more affordable and accessible to anyone who dreamed of taking to the skies.”

Deciding to challenge the norm and improve the flight training industry, he formed his own flight school with only one employee – himself – at the age of only 22. Kicking things off with a single airplane, Khokhani’s unique approach to flight training saw him grow his business trifold in months. Over the next few years, his focus on innovation and excellence allowed him to respond dynamically to business and consumer needs, offering the very best pilot training whilst promoting efficiency and accessibility.

Neel’s burning desire to provide the highest quality flight training resulted in Soar Aviation’s partnership with the highly regarded Box Hill Institute, a provider of higher education. The combined expertise of Soar and Box Hill has given students access to highly experienced instructors and state-of-the-art equipment, with more time and resources able to be used for producing the best pilots.

As Soar Aviation continues to grow, their focus is to continue building an ecosystem of employment pathways and supplying the wider aviation industry with highly qualified pilots. With an aim to help solve the global pilot shortage, Soar Aviation have set a goal to deliver 10,000 highly qualified pilots to the aviation industry by 2034. Yes, 10,000, which shows how far the company has come.

“Top industry analysts have already determined a global shortage of over half a million pilots by 2034,” Kohokhani says. “Our purpose is to help those with a passion for aviation join the profession and support their goal of succeeding in an aviation career.”

LEARNING TO FLY
If you’ve spent your whole life looking towards the heavens and dreaming of cruising amongst the clouds, then its seems only natural to go for your pilot license. However, for many the concept of getting their qualifications seems too difficult or expensive to contemplate – and that’s the sort of mindset that Soar are determined to change.

Soar’s instructors are passionate about proving that taking the first step into the brave and exciting world of flight training is easier than most people think. One way of achieving this is through their Trial Introductory Flights, which are obligation-free first lessons that prove to prospective pilots that they can do it.

After a brief introduction on how an aircraft flies and is controlled, excited new pilots jump into the cockpit of a real plane and take to the air. It’s the perfect way to demonstrate that learning to fly isn’t nearly as difficult or daunting as it can first seem. Whilst there’s no pressure to move on to bigger things after a one-off lesson, it’s no surprise that the vast majority of rookies who try the introductory flight end up going for their RA license. It’s another sign of how progressive Soar is.

The obvious next step is the Recreational Pilots Licence – Pilot Certificate (RA-Aus), which is the ideal starting point for pilot training. If you’re not sure which direction you want to head in regards to your accreditation, check out out Rec Check feature in this issue, but the reality is that most people will go the RA route.

Completing the initial stage of flight training in a Light Sport Aircraft (LSA) is the most efficient and cost effective route for learning to fly in Melbourne or Sydney. Whether you’re training for fun or for a career in aviation, your Recreational Pilot Licence – Pilot Certificate (RA-Aus) should be your first goal, and Soar are ready to help you in that direction.

Students will generally need to complete between 20-30 hours of flight training to achieve their Recreational Pilot Licence (RPL), along with both group and one-on-one tuition. They’ll gain knowledge of how to fly an aircraft, from effects of control, climbing and descending to completing that important first solo flight. 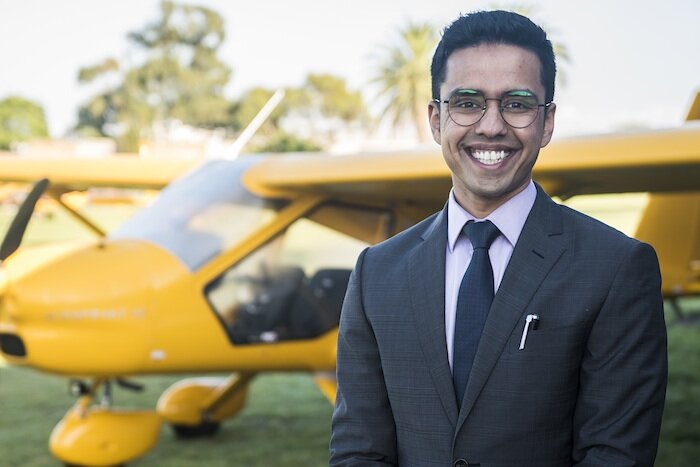 The team from Soar are also there for anyone dreaming of getting their Private, Commercial or Instructor ratings. It’s entirely possible for a pilot to go from novice to master, with all of their training conducted by the same company. It’s this sort of streamlined, simple and yet all-encompassing organisation that’s made Soar this country’s leading training company.

SCHOOL RULES
Soar’s dedication to changing and improving the way people learn to fly is epitomised by their teaming up with one of Australia’s top TAFE centres. In a first for TAFE students around Australia, Soar Aviation and Box Hill Institute have entered an employment pathway agreement with Katherine Aviation and AAA Charters in the Northern Territory.

“Top industry analysts have already determined a global shortage of over half a million pilots by 2034, so this partnership will incentivise more prospective pilots into joining the profession and support their transition into an aviation career,” Khokhani reveals. “Our unique course structure offers flexible flying arrangements and part-time study options and is the preferred choice for people working full-time who want to achieve their dream of becoming a pilot. This opportunity offers our graduates a secure, direct pathway to their first aviation job with Katherine Aviation and AAA Charters.

“Typically it would take two to three years for a graduate to reach the level offered by this partnership, so we’re pleased to be able to provide an accelerated option to becoming an airline pilot.”

The team from Soar aren’t the only ones thrilled by the possibilities of this incredible partnership, with Box Hill Institute CEO Norman Gray throwing his support behind it. “The merit-based scheme will improve our student success rate by exposing them to real employment opportunities and the potential to reach their aviation goals in a shorter timeframe,” Gray says.

MEET THE FLEET
In order to run Australia’s most popular flight school, Soar needs to have some fantastic machines to send their students up in. That’s certainly the case, with a range of aircraft that will challenge and excite pilots new and old, and help to improve their skills in the most efficient way possible. 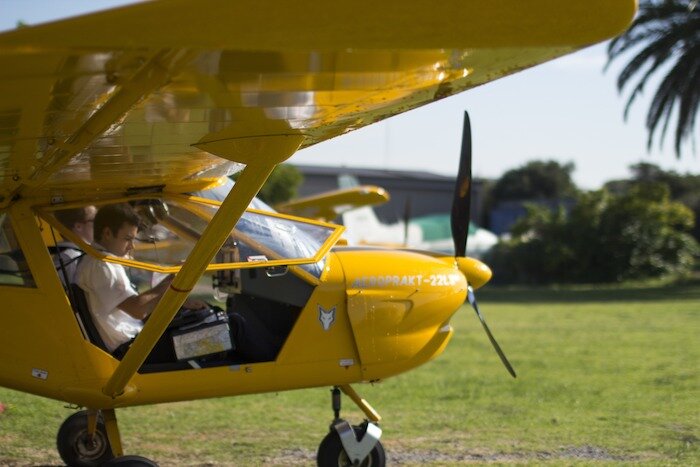 FOXBAT A22
Since acquiring the award-winning Foxbat three years ago it has quickly become the favoured two-seater aircraft among new student pilots, for a number of reasons. The Foxbat has extremely short take-off and landing capacity and is a very easy and friendly aircraft train on. Its brand new avionics and spacious cabin are unmatched in its class, making it easy to fly and extremely comfortable. The brilliant visibility, thanks to massive glass doors and giant windows, also helps to make lessons just fly by!

AQUILA A210
The Aquila A210 is a popular choice for use in advanced flight training around the world, and Soar are certainly up to date on this trend. This is due to its low fuel consumption and high performance record, plus its high cruising speed. It provides more of a challenge, and brilliantly prepares more experienced pilots for trickier planes.
It’s equipped with two side-by-side seats, low wings and a cruciform tail. Complete glazing of the canopy allows an excellent all-round vision. Powered by a Rotax 912 flat four engine, it’s got more than enough grunt to get your heartbeat racing.

A32 VIXXEN
The Foxbat A32 Vixxen is more aerodynamic than the A22LS, and hence flies faster, glides better, stalls slower and uses less fuel than many other LSAs. Since Soar started offering this little firecracker it’s proven extremely popular with their students, many of whom love it so much they’ve gone on to buy one of their own.

BEECHCRAFT DUCHESS
The Beechcraft Model 76 Duchess is an American twin-engined, four seater monoplane that’s perfectly suited to training purposes. With an aerodynamically advantageous T-tail, the Duchess has outstanding design characteristics and is a popular twin-engined aircraft amongst student pilots.

BRISTELL SLSA
Safety, form, and comfort are the cornerstones of Bristells. With exceptional endurance and a light, spacious design, Bristells offer outstanding performance from the Czech masters of aviation. The aircraft features two side-by-side seats, low-wings and its good ergonomic design represents the largest cockpit in its category.