It’s lucky that airliners come equipped with lifejackets, with travellers disembarking the first international flight from Singapore to Canberra to a deluge of spring rain. But the downpour didn’t dampen the spirits of airport personnel and plane spotters eager to witness the maiden touchdown of the Singapore Airlines Boeing 777-200ER designated 9V-SRP.

At 95% capacity with about 240 people on board, the aircraft was greeted by a water cannon salute by Airservices Aviation Rescue and Fire Fighting (ARFF) and a personal “welcome to Canberra” greeting from the tower. The aircraft was carrying the Executive Chairman of the Capital Airport Group, Mr Terry Snow and Ginette Snow who were welcomed by the Singapore Airlines Executive Vice President Commercial, Mr Mak Swee Wah, Canberra Airport Managing Director, Mr Stephen Byron and ACT Chief Minister, Mr Andrew Barr MLA.

The brand-new ‘Capital Express’ route will link Canberra and surrounding regions with Wellington and Singapore via services that will operate each Monday, Wednesday, Friday and Sunday. The SQ292 and SQ291 flights are the first direct international flights in a decade, the last being a short-lived Air Pacific (now Fiji Airways) service from Canberra to Fiji in 2004.

Standing in the terminal as the passengers deplaned, I was tapped on the shoulder by more than one curious traveller asking who was on board or if a celebrity had come to town as the terminal erupted into applause and welcoming parties handed out posies of tulips and daffodils to the arriving passengers. 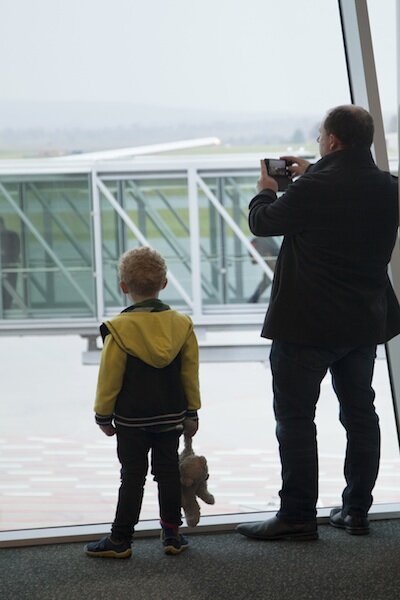 Mr Byron said Australia deserved an international service into the capital stating that “overseas travellers, especially those from Asia, expressed surprise that Australia is one of the very few countries in the world which does not have direct flights into the capital city.” Mr Byron said that the beginning of the international service was also an economic win for the airport and surrounds saying “international flights into Canberra have enormous potential for producers and manufacturers to our north, west and south. It means, for example, that oysters harvested in the morning on the NSW South Coast can be on a lunch table in Singapore the next day. It also offers new options for producers who have previously used Sydney airport as a freight hub”. Mr Byron also mentioned that the Airport was in discussions with other international airlines, and hoped to offer services to more international locations in the future.

Mr Terry Snow said that the decision by Singapore Airlines to begin international operations was proof that the long term plan he envisioned for the airport has paid off. “From day one, my family set about creating a world-class gateway for the national capital. As long-term locals committed to the prosperity of the capital region, our campaign to see Canberra become linked directly to the rest of the world has been constant. We have worked closely with the ACT Government and Visit Canberra, and particularly Chief Minister Andrew Barr who over many years has been unwavering in his passion and support for our quest to gain direct international flights.”

The stopover was only fleeting, with the aircraft having been re-fuelled, repacked, boarded and in the skies bound for Wellington within 75 minutes with Mr and Mrs Snow having reboarded following the official opening of the international departure gate. Also on board was Mr Andrew Barr MLA who was optimistic about future prospects for the airport saying that the government’s medium-term goal was to expand the airport to other low-cost carriers. “This is a fantastic day for Canberra” Mr Barr said “it opens a range of opportunities to our residents and surrounding residents to Singapore and South-east Asia but then onto Europe.” He said the flights would benefit jobs, trade, investment, education, tourism and regional freight. 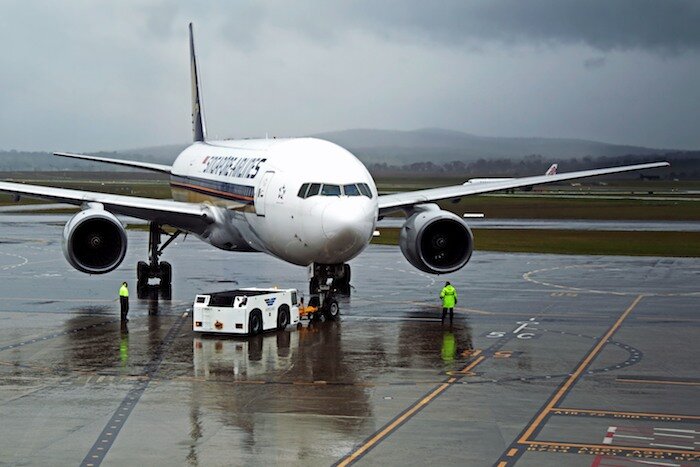