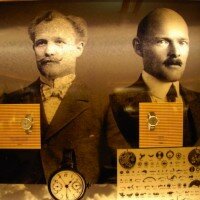 For five generations, Breitling has stood for aviation and through its quality, the brand rapidly gained favour among aviation pioneers in need of reliable and accurate instruments. Thanks to these chronographs, Breitling became an integral partner in the conquest of the skies. But what’s the story behind the brand? How did the company become such a critical element of aviation? Read on and discover Part 1 of an interesting journey – from humble beginnings in the late Nineteenth Century to stunning growth by the 1950s.

When Leon Breitling opened his workshop in Saint-Imier, Switzerland in 1884, he chose a specialty as exclusive as it was demanding: chronographs and timers. These were precision instruments for use in sports, the sciences and industry. Thanks to the company’s quality products and its founder’s inventiveness, Breitling quickly met with success. Its vast selection of technical watches appealed to many professional and private users, including pioneers in aeronautics, a science that would eventually change the world.

At the time, the chronograph was the youngest and most modern of all the watchmaking complications. To be able to measure short time intervals, watches first had to achieve a sufficent level of precision. Curious and inventive, Leon Breitling enjoyed exploring new paths; imagining, creating and solving problems, and seeking solutions. These were also the years in which aviation, then still in its infancy, saw its first successes, and its first heroes.

Aviation’s pioneers needed reliable instruments to measure their exploits. Completely enamoured with performance, speed and accuracy, Leon Breitling must have been fascinated by the exploits of the aviation heroes who would eventually become worldwide legends. These included American brothers Orville and Wilbur Wright, who, in 1903, made the first flight in a heavier-than-air machine at Kitty Hawk, North Carolina; Frenchman Louis Bleriot, who, in 1909, became the first man to pilot a heavier-than-air aircraft across the English Channel; Roland Garros, the French pilot who crossed the Mediterranean in 1913 before serving as a fighter pilot during World War 1; and Adolphe Pegoud, the “King of the Air” who, that same year, did history’s first loop-the-loop, followed by barrel rolls, tail slides, spiralling descents, verticle spins and other manoeuvres, paving the way towards a new discipline known as aerobatics. The first great air shows also attracted huge and enthusiastic crowds as strangely-shaped machines tried to fly higher, further and faster.

Leon Breitling died in August 1914, a few days after the outbreak of World War 1; his son Gaston stepped into his place. Born in 1884, the very year the company was founded, Gaston didn’t take long to leave his own mark on the epic tale of the chronograph as the company continued to devlop its line of timers and measuring instruments for sports, enthusiasts, technicians, engineers and “pilots”. 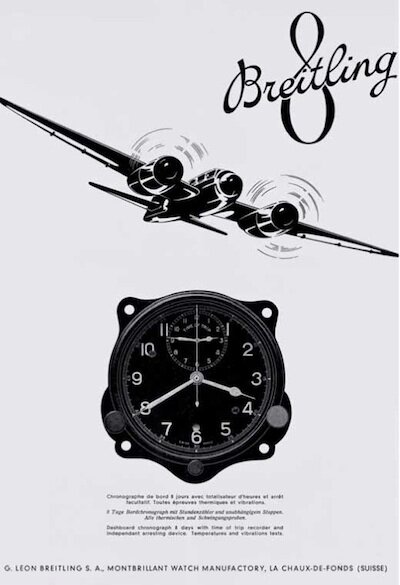 While the “Great War” struck the flourishing Swiss watchmaking industry a severe blow, the post-war period saw aviation progress with staggering speed. At first it was used for reconnaisance, then as a combat weapon with the appearance of fighters and bombers and the exploits of flying aces such as the famous “Red Baron” Manfred von Richthofen. New types of aircraft appeared, even more powerful and effective, often mass-produced in very large numbers. In 1918, 15 years after the Wright brothers skimmed a few tens of centimetres above the earth, planes were already commonly flying at atitudes over 17,000 feet. Both altitude and distance records were set. Gaston Breitling took advantage of this post-war momentum to introduce a new chronograph improvement in 1923. Based on his invention of 1915, it retained the principle of the separate pushpiece at 2 o’clock, but this pushpiece now controlled only the start/stop function, while the instrument was reset to zero by pulling on the crown. In addition, a safety system prevented the chronograph from being reset while its hands were in motion. It was now possible to time several events in succession without necessarily having to reset the instrument to zero – so several successive times could be added together, whether for sports competition, time of flight calculations or an industrial or scientific process.

Gaston Breitling died in July 1927, a few months after Charles Lindbergh flew across the Atlantic from New York to Paris in the “Spirit of St Louis”. Gaston’s son Willy, born in 1913, was much too young to take over the business so its operation was temporarily entrusted to more expert managers.

In 1928, a man who was to play an influential role in the company’s fortunes for almost 50 years, arrived at Breitling.  A hard-working watchmaking engineer, Marcel Robert was honest, loyal and conscientious, quickly earning respect for his “skillful hands” and creative mind. It was also Marcel Robert’s idea to launch in 1931, the first Breitling chronograph designed specifically for aircraft intrument panels and dashboards for cars. This had everything one could wish for: rugged construction, an accurate movement, a light but sturdy aluminium case, and quick and easy installation. Another recognisable feature was the black dial with large luminescent numbers, useful for accurately reading the time of day and time of flight, even during night trips.

In 1932, 19-year-old Willy Breitling became head of the company and while he didn’t possess the watchmaking abilities of his grandfather and father, he soon brought his own strengths to the company: passion, energy, an assertive personality, and ultimately, shrewd business acumen. Willy also thrived on challenges and loved people. But more importantly, he loved chronographs and timers.

During the 1930s, Breitling strengthened its ties with aviation by creating a whole line of onboard chronographs for aircraft cockpits. This reliable, sturdy, accurate equuipment found favour with many civilian and military users, particularly the upper echelon of the Royal Air Force. With the return of peace and the unprecedented mania for technical watches, aviation continued to soar and the brand made a name for itself with several influential wrist chronograph models that cemented its success in all areas. On April 12 1935, American pilot Amelia Earhart flew solo across the Pacific from Honolulu to Oakland, California. On September 28 1936, RAF squadron leader FRD Swain reached the record altitude of 49,967 feet. Commercial aviation was booming and night flights were becoming common. In 1936, TWA placed the first Douglas DC-3 in service; an aircraft that w0as quickly adopted by many airlines around the world.

Breitling began to become more interested in all of these aviators, who had long been among the privileged users of its pocket instruments, then later its wrist models. In 1936, the company introduced a wrist chronograph specially designed for the adventurers of the skies. It had a black dial, luminescent numbers and hands and a strap with large attachment points that allowed the watch to be worn “over a leather flight suit”. The oversized crown and pushpiece could easily be manipulated while the user was wearing gloves. This chronograph did not have a minute counter, but it did have a luminescent index on the rotating bezel that allowed the pilot to mark the hour or minute of his takeoff or the beginning of a turn. So this marker could serve as a minute totaliser.

The second half of the 1930s also saw increased production by Breitling of a “specialty” that quickly became one of the mainstays of its reputation: onboard chronographs for aircraft. These tools gave an accurate time of day and allowed the exact time of trip to be calculated; they were an indispensable addition to the many cockpit instruments – airspeed indicator, altimeter, slip indicator, compass, drift indicator, and maps, not to mention the engine tachometer, the outside temperature indicator, the oil pressure gauge and the fuel gauge. It was a demanding and unforgiving environment and the challenge was both technical and aesthetic in nature, because onboard chronographs had to do more than just measure the passage of time with the greatest possible accuracy. They also had to stand up under the particularly harsh conditions of aerial navigation – shocks, vibrations, temperature changes, magnetism, etc – all while providing the best legibility and functionality in all circumstances.

As early as 1931, the company had offered a model intended for aircraft instrument panels and car dashboards, and having the technical characteristics required for these types of instruments. But at Willy Breitling’s urging, it developed an entire collection of chronographs and onboard timepieces to meet a variety of needs. 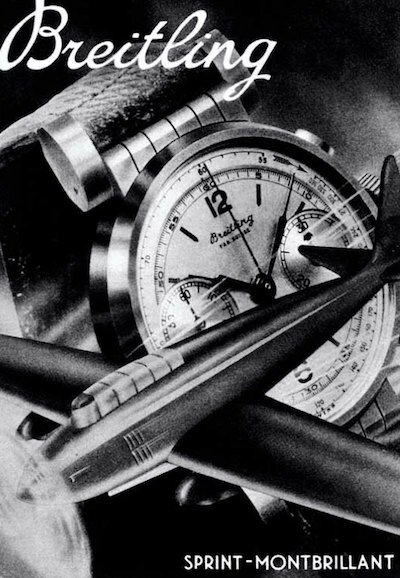 In 1938, Breitling created a new department specialising in chronographs and watches for aeronautics named Breitling HUIT Aviation. The products produced by the new department soon attracted the attention of aviation professionals, especially the top brass in the armed forces. Willy Breitling often travelled to England and he was welcomed in high places. As the war approached, he received a large order for chronographs from the Royal Air Force. So it was that the brand gained access to the cockpits of those legendary fighter planes that were soon to become famous in the great aerial battles.

Aviation, which was to play a major role in the Second World War, needed reliable, accurate onboard chronographs more than ever. The brand continued to sell to England, but also to other armed forces, a situation that demanded some diplomatic precaution. Tus the company’s official line was: “Breitling supplies many Governments”.

Breitling also filled out its line of wrist chronographs for pilots with versions having two pushpieces, some of which had range-finder scales. One of the standouts among these models was a count-down chronograph” designed more specially for bombers, with a system for running both forwards and backwards, oversized controls, a large notched bezel and a strap that allowed the pilot to attach the watch to his leg.

At the conclusion of World War 2, the chronograph’s popularity grew to unprecedented levels. In 1952, Breitling created a “wrist instrument” that quickly became its most iconic model, the famous “Navitimer”, with its circular slide rule for performing all calculations related to air navigation. As the “official supplier to world aviation” the brand played a part in the rapid growth of air transport by equipping the finest propeller aeroplanes, and later, jet planes, with its cockpit chronographs.

In the 1950s, aeronautics continued its ascendency as the golden age of propeller planes supplanted ocean liners. The great American aircraft manufacturers – Lockheed, Convair, Douglas and Boeing – were locked in ruthless combat to develop increasingly high-performance, reliable and comfortable long-range aircraft. In October 1950, the first Lockheed L-1049 Super Constellation took off. This was a longer version of the Constellation. With its curved fuselage, dolphin-like silhouette, square portholes and triple vertical stabilisers in the rear, this four-engine plane needed little time to establish itself as one of the most elegant and prestigious aircraft of all time. Later, equipped with turbo compound engines, the “Connie” was to become the queen of the skies, providing non-stop service between the old world and the new.

Recreational aviation also saw significant development as the number of private pilots and aviation clubs increased. The sporting world discovered the thrill of heights through skydiving, gliding and aerobatics. The helicopter took off too. Aviation also flew into the jet age at full throttle. The skies above Korea saw the first great dogfights between jet fighters – MiGs and Sabres. Chuck Yeager’s emulators attacked the sound barrier. Records for speed, altitude and distance fell right and left. The public was just as excited by the test pilots’ feats as they had been 50 years earlier by those of the amazing, daredevil barnstormers. It did not take long for advances in military applications and research to be reflected in civil aviation. In 1952 the DeHavilland Comet, the first jet airliner, flew from London to Johannesburg, heralding the great revolution in modern air transport.

At the time, Breitling already had a highly visible presence in aviation. Its cockpit chronographs equipped a growing number of military and civilian aircraft. The brand also offered pilots a broad selection of wrist chronographs of excellent reputation. But an unsatisfied Willy Breitling wanted to fly even higher. 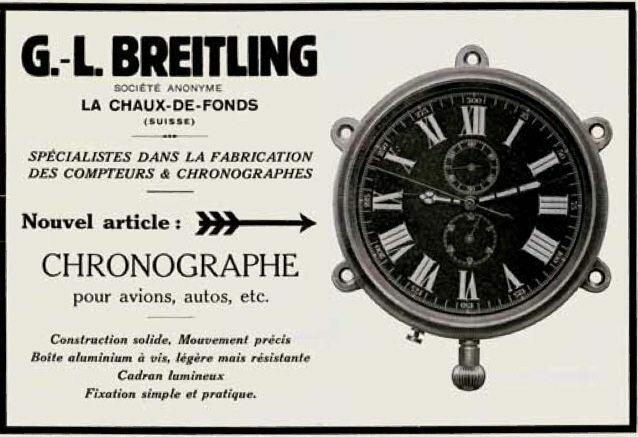