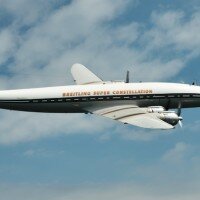 When he first opened his workshop in Saint-Imier, Switzerland in 1884, Leon Breitling started out on a journey marked by the high demands of an exclusive industry.

Buoyed by the rapidly developing technology of early aircraft, Breitling strived in his own field of watchmaking to meet the needs begun by early aviators. Since then, his chronographs and timers, instruments of precision and exactitude, have ridden out the highs and lows of aviation history fixed firmly to the wrists and instrument panels of aviators.

A chronograph is a specific type of watch which features a stopwatch combined with a display watch. A basic chronograph has an independent sweep second hand; it can be started, stopped, and returned to zero by successive pressure on the stem. In the years in which aviation itself began to bloom, Breitling’s company began to see its own successes. The chronograph was the most contemporary of all time keeping devices and required a high level of accuracy in terms of both components and manufacture to be able to measure short time intervals.

A few days after the outbreak of World War I, Leon Breitling died in August 1914 and his son, Gaston took up the charge. However, thanks to Leon Breitling’s curiosity and passion, attributes which he passed onto his son, the company had already established itself with a vast range of technologically advanced watches on offer for both professional and private users. Born in 1884, the same year the Breitling company was founded, Gaston continued to develop Breitling’s line of timers and measuring instruments for sports, enthusiasts, technicians, engineers and pilots. 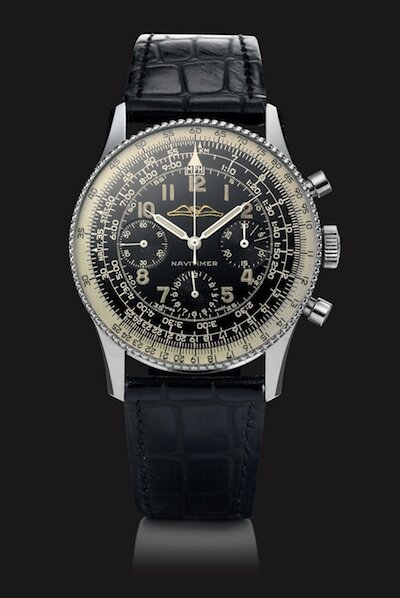 In 1915, Gaston Breitling invented the wrist chronograph push piece independent from the crown handling all additional functions. While the War dealt a severe blow to the Swiss watchmaking industry, the post-war period saw aviation progress at a staggering pace, with aircraft initially utilized for reconnaissance and then as a combat weapon. New types of aircraft appeared and evolved into ever more incarnations. Designs found to be successful were often churned out in vast numbers. In 1918, planes were already reaching altitudes of over 17,000 feet. Gaston Breitling used the opportunity of the post-war boom to introduce a new chronograph improvement in 1923. Based on his 1915 invention, the improved chronograph retained the principle of the separate push piece at 2 o’clock, but this component now controlled only the start/stop function, while the instrument was reset to zero by pulling on the crown. In addition, a safety system was incorporated to prevent the chronograph from being inadvertently reset while its hands were in motion. These improvements made it possible to time several events in succession without having to reset the instrument to zero – so several times could be added together.

1928, Marcel Roberts arrived at Breitling and it was his idea in 1931 to launch the first Breitling chronograph designed specifically for aircraft instrument panels. Constructed of a light but sturdy aluminium case which allowed for quick and easy installation, the on board aircraft chronographs had an instantly recognisable feature – a black dial with large luminescent numbers, useful for accurately reading the time in the dark of night flying, as well as during the day.

In 1932, 19-year-old Willy Breitling became head of the company and although he was not a watchmaker, he was known for his passion and assertiveness and was enthusiastic about the chronographs and timers of his predecessors. Over this period Breitling created a line of on-board chronographs specifically for aircraft cockpits. The endeavour proved to be successful and the company garnered a solid reputation among civilian and military users due to the sturdy and reliable nature of the equipment.

By the 1930’s commercial aviation was in full swing and night flights were rapidly becoming more common. Alongside these advances, Breitling was keeping abreast with the thriving aviation industry by introducing a wrist chronograph in 1936 that had a black dial, luminescent numbers and hands and a strap with large attachment points that allowed the watch to be worn over a flight suit. It’s oversized crown design and push piece allowed for manipulation even while the user was wearing gloves. This chronograph did not have a minute counter, but it did have a luminescent index on the rotating bezel that allowed the pilot to mark the hour or minute of his take off or the beginning of a turn.

The 1930’s also saw the increase in production of Breitling’s on board chronographs for aircraft, which delivered consistently accurate readings and allowed for the exact time of the trip to be calculated precisely. They became an indispensable tool among the array of cockpit instrumentation, able to meet the often harsh demands of aerial navigation. Willy Breitling created a new department in 1938 called Breitling HUIT Aviation. The department was designed to specialise in chronographs and watches for aeronautics. As World War II approached, Breitling received a large order for chronographs from the Royal Air Force.

Breitling filled out its line of wrist chronographs for pilots with some versions having two pushpieces and range-finder scales. One of the standouts among the models produced during this period was a count-down chronograph designed more specially for bombers, sporting oversized controls and a system for running both forwards and backwards. A large notched bezel and strap allowed the pilot to attach the around the leg if necessary.

When the war did arrive, pilots engaged in the legendary heat of air-borne combat may have found themselves comforted somewhat by their time-keeping companion, metering evenly when the truthfulness of time itself would have seemed to simultaneously speed up and slow to an impossible halt.

Breitling continued to sell to England, but it also had to enter the unchartered waters of diplomacy- as the company continued to offer its equipment to other armed forces at the same time. The company’s official line for that period was simply “Breitling supplies many Governments”. 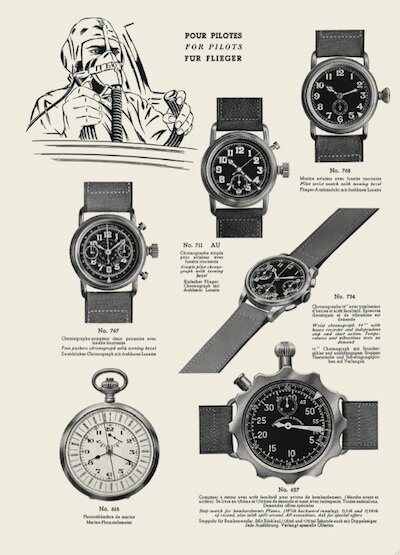 During the 1950’s Breitling created the famous “Navitimer”, with its circular slide rule for performing all calculations related to air navigation. It quickly became an icon of the Breitling company which itself was now dubbed the “official supplier to world aviation”. On 24 May 1962, Scott Carpenter orbited the Earth three times aboard the Aurora 7 capsule. Strapped firmly to his wrist was a “Cosmonaute” Navitimer with a 24-hour graduation to distinguish day from night which became the first wrist chronograph to travel in space. Navitimers were even supplied to the Iraqi Air Force in the 1970s and 1980s with IAF wings engraved on the watch’s’ case back. The Navitimer remains in production today, available in eight versions and powered by Breitling’s in-house B01 chronograph movement.

During this period Breitling also immortalised itself within the pinnacle of pop culture, featuring in the 1965 James Bond movie Thunderball in which Bond is issued with a Breitling Top Time by Q, who tells him it is also a Geiger counter. The Geiger counter in the watch allows Bond to locate two stolen nuclear warheads. After the movie was filmed the watch disappeared. In 2012 it resurfaced in a car boot sale in England where it was bought for £25. It later sold at auction at Christie’s auction house for over £100,000.

When pilot, engineer and microelectronics specialist Ernst Schneider was entrusted with the nearly 100-year-old brand in 1979, a completely redesigned Chronomat aviation chronograph emerged as a dedicated pilot’s watch. Powered by the Valjoux 7750, the chronograph debuted in 1984 in conjunction with the manufacture’s centennial anniversary. Developed in conjunction with the Italian Air Force aerobatic display team, the Frecce Tricolori, the Chronomat’s steel case now featured a larger crown and pushers, and a rotating timing bezel with four “rider tabs” which allowed for easier turning of the bezel while wearing flight gloves. The type 42 slide rule was replaced by a 0-100 decimal-minutes scale and a tachymeter scale for timing involving speed and distance. The new Chronomat also displayed Breitling’s now ubiquitous “Winged-B” logo, and a special version of the Chronomat featuring the Frecce Tricolori logo on the dial was issued to members of the Italian aerobatic team.

A year after the release of the new Chronomat, Breitling debuted the “Aerospace”, originally referred to as the “Navitimer Aerospace”. The new model featured a distinctive analogue-digital dial – Breitling’s first strictly quartz-powered pilot’s watch. The Aerospace has been continuously updated over its three-decade history. In 2002, it became one of the first Breitling timepieces to incorporate the brand’s sophisticated SuperQuartz movement, which is thermocompensated for resistance to temperature and chronometer certified.

In 1995, Breitling introduced a ground-breaking quartz-powered pilot’s watch called the ‘Emergency” – the first watch to contain a built-in emergency micro-transmitter. Operating on the 121.5MHz air distress frequency, the watch could be activated to broadcast a distress signal which would enable search and rescue teams to locate the wearer. It has successfully aided rescuers in several documented cases. A new version of the Emergency was introduced in 2013 with the added capability to broadcast a distress signal on the 406MHz band, a digital frequency that’s part of the COSPAS-SARSAT international satellite alert system. Once the Emergency’s antennas are activated and deployed from the watches’ titanium casing, the satellites can fix the wearer’s position precisely. 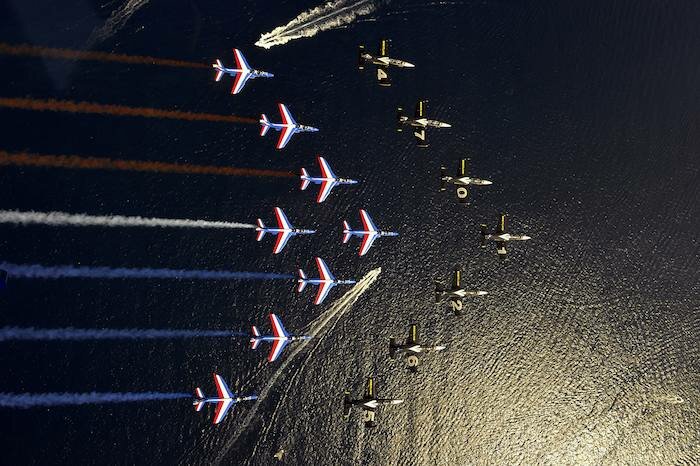 Breitling has continued alongside the aviation industry in developing cutting edge technology for aviators and their craft. In 2014, the company developed its own multi-function electronic chronograph with both analogue and digital display, the Caliber B50, with a SuperQuartz movement. In the following year, it launched the B55 electronic chronograph caliber.

As passionate about aviation as they are about their own products, Breitling also invests heavily in aeronautical endeavour through sponsorship, including the first circumnavigation of the globe by balloon by the Breitling Orbiter, the fixed-wing jet pack flights of Yves Rossy, aerobatics teams (including the Breitling Jet Team and Breitling Wingwalkers) and the Reno Air Race.

From humble beginnings to the present day, Breitling has cemented itself as the wingman of aviation time-keeping. Breitling and his predecessors’ commitment to detail, precision, technological advancement and accuracy means that they are not only a trusted provider of time-pieces, but have travelled within the cockpits of the pioneers of aviation, becoming a part of aviation history as they continue to strive for excellence into the future. 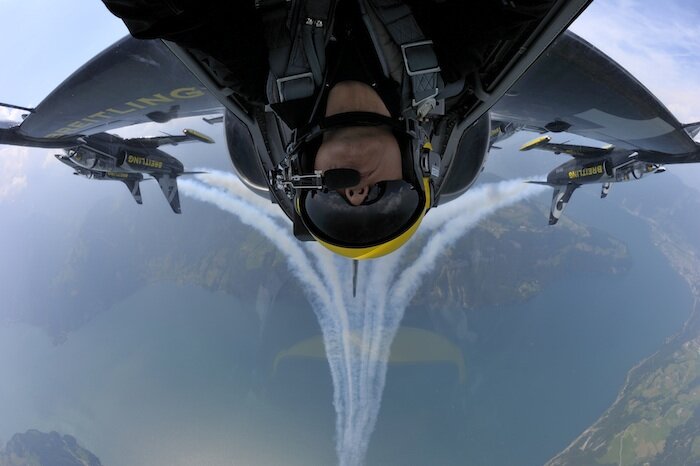