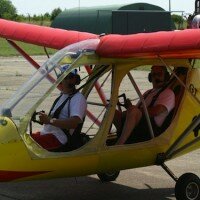 In the automotive world, GT stands for Grand Touring and that may be an appropriate comparison for the GT 500 from Quicksilver Aircraft Manufacturing. With the unlimited view from the front seat of this tandem two-seater, touring in the GT 500 is definitely a treat.

Tom Price and Dave Cronk, two of the ultralight industry’s most experienced engineers and designers, created the GT 500, and introduced it in 1990. Dave was one of the original designers with Eipper Formance, the hang glider company that first marketed the foot-launched Quicksilver glider. The glider later evolved into the powered Quicksilver ultralight and gave birth to the company we know today as Quicksilver Aircraft Manufacturing.

The GT 500 followed on the success of Cronk and Price’s single-place GT 400, which has now sold more than a thousand units. After a couple of years of careful design deliberations, the duo followed with the GT 500. Since it came on the market more than two decades ago, the plane has retained its underlying design philosophy of being a higher end “ultralight” while changing in subtle ways-for example, adding a zip-up full enclosure for those who enjoyed enclosed cockpit flying as opposed to open-air ultralight flying.

Bells and Whistles
The GT 500 is actually a light airplane ahead of its time. The aircraft offered for this evaluation flight sported a well-equipped full panel with tachometer, water temperature gauge, Hobbs hour meter, magnetic compass, altimeter, vertical speed indicator, front and rear airspeed indicators, plus oil temperature and pressure gauges. The zip-up enclosure is standard.

In the cockpit several levers allow you to optimize your flight. You’ll find a trim lever to the left of the front yoke base, a hand brake on the right, plus throttles on the right in both front and rear seats. The front seat has a choke and primer plus electrical switches.

A mechanical flap handle on the floor to the right of the main boom tube is easier to operate for most pilots than the overhead lever used in some designs. Overhead levers demand an awkward motion; however, engaging the flaps in the GT 500 still requires moderate physical exertion. Quicksilver’s factory pilots will tell you to keep your hand on the flap lever as you retract it. Failure to observe this advice will cause air loads on the flaps to snap the lever forward aggressively.

In the GT 500 you can lean far back in the seat and look up into the wing root to see fuel quantity. Because airplane fuel gauges, including those in general aviation (GA) airplanes, seem to be notoriously inaccurate, it’s nice to be able to perform this visual check.

The instrument panel in this GT 500 had a shiny, satin-finish aluminium. It looked high tech, but it produced a significant reflection in the windscreen when flying with the sun at my back. A dull black panel is often preferred exactly for this reason.

With its flexible plastic doors, this GT 500′s noise level was tolerable. To prevent hearing loss, I wore a headset. But the 912 engine is less noisy than many two-stroke powerplants.

Let’s Go Flying!
The view from GT 500′s front seat is wide open in every direction. The demonstrator I flew was fitted with a skylight that expanded the view even further. I felt confident that the runway was traffic-free before takeoff.

As I’ve often found on light aircraft, the 80-hp Rotax 912 engine offers more power than you might need. After the first takeoff, I subsequently launched with less than full power just to keep the climb angle better for forward vision.

The GT 500′s wide-open visibility is valuable on landing approaches, too. You’ll enjoy good side visibility regardless of which way the airport pattern works. In this regard, its tandem seating is superior to side-by-side seating. Speaking of landing, with engine power reduced, I made my approaches at the common ultralight “50-is-nifty” speed. At idle thrust, 20 degrees of flaps produced a significantly low nose, which is great for forward landing visibility, and this flap angle restrains speed well too.

The flaps on the GT 500 are dynamic control surfaces with plenty of power. With flaps lowered two notches, I was delighted to fly low and slow in a relaxed and enjoyable manner. Overall, the collection of several levers in the cockpit makes for a busy space.

This particular GT 500′s trim lever didn’t seem to have much effect, though that may have been caused by a rigging error or adjustment problem. However, the brakes fitted to this GT 500 were effective: you must let go of the throttle to use the hand brake, as both are mounted on the right side of the yoke, (some GT500 owners have rectified this by mounting the brake on the left side). Furthermore, this demonstrator GT 500 had one of my favourite fail-safe instruments: a yaw string. A yaw string is highly sensitive if the string is light enough, and most pilots will find they like it even better than the turn-and-bank ball.

Conventionally trained pilots accustomed to general aviation aircraft will probably feel right at home with the GT 500′s yoke. I’ve long preferred a control stick in a sport aircraft, but I must admit that a yoke offers good leverage and perhaps the chance for finer control motion, especially in comparison with a side-mounted joystick. Like all components in this airplane, the yoke arrangement in the GT 500 was well executed.

Discounting coordination qualities and stick motion, steep turns and all other turn manoeuvres went well in the GT 500. Despite some control force disharmony and the ergonomic issues, the GT 500 is remarkably precise in handling. Turns to headings and fine adjustments on final approach showed strong control authority.

Many aircraft I’ve flown offer more fluid control motions than the GT 500, though that can translate to faster control response that does not please everyone. Oftentimes, aircraft with lighter handling gain this quality by flying faster, yet many ultralight enthusiasts relish flying slowly over fields, an activity which the GT 500 does extremely well.

The GT 500 was well behaved at high cruising speeds also. At 75 knots (140 kmh) indicated, the aircraft felt solid. At 4500 rpm, I cruised 65 knots (120 kmh) in level flight, which turned out to be a pleasant flying speed. Noise and vibration were low, plus fuel consumption was quite miserly.
single trial. The break was clearly noted, but all were gentle. If you lower the GT 500′s nose ever so slightly you recover almost instantly.

After doing steep turns at 45 degrees of bank, I performed accelerated stalls that were noticeable only by a faint burbling when the air separated the wing. I’d observe that my ability to note this subtle quality of handling after flying the aircraft for just 45 minutes tells you something about how quickly you can become comfortable in the GT 500.

How Much?
Currently, the GT 500 can be flown as an ultralight trainer, as a 51-percent amateur-built aircraft, or as a recreational aircraft. Bought as a complete kit, the GT 500 is priced at about $46,000 (plus GST and freight) for the 912-powered model, but it is quite well equipped for that price. Comparable aircraft from other suppliers may seem lower priced, but you must compare them with the same equipment.

If that figure seems too high, you can knock it down by $13,000, to about $33,000 (plus GST and freight), by going with the two-stroke Rotax 582 engine that has proven itself for years on this design. A 582-powered GT 500 also weighs 28 kgs less; therefore, it can climb at the same rate even with 15 less horsepower. Quicksilver lowers the gross weight to 453 kgs with the 582 but payload remains within 17 kilos of the more powerful model. Of course, fuel consumption will actually rise with the smaller engine: one of the facts of four-stroke efficiency.

For a ready-to-fly price on the R-912 version, it will generally cost around 15% extra, and you can contact your local Quicksilver dealer here in Australia who services Australia, New Zealand and South Pacific for more information. Before comparing purchase prices with other aircraft, you should check with the local dealer, as Rotax engine prices alone can affect the final price significantly. However, with the Aussie dollar’s significant advance against the euro recently, the pricing might be better than ever.

All in all, the GT 500 with it’s excellent safety record, customer satisfaction, parts backup, and value for money, definitely deserves a close look. 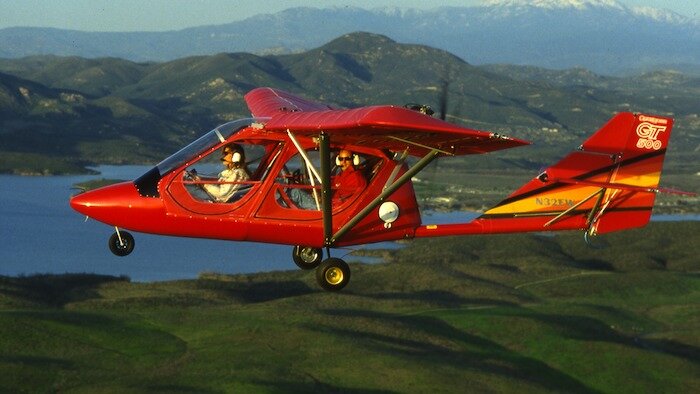