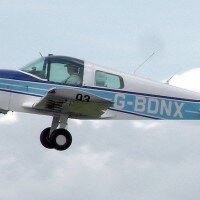 The aircraft line has become known for its quick, responsive and unforgiving handling which can be a demanding learning curve for students. It has retained its popularity in-part because flight schools found that students who have mastered the AA trainers transition far more easily to more advanced aircraft.

Originally designated the BD-1 by Jim Bede in 1962, the aircraft was initially designed to be sold as a kit-built aircraft, though Bede later shifted to a completed aircraft configuration. All models of the AA-1 accommodate two people in side-by-side seating under a sliding canopy and are noted for their exceptionally light handling. The series features a unique bonded aluminium honeycomb fuselage and bonded wings that eliminate the need for rivets while maintaining strength.

The prototype first flew on July 11, 1963 and featured foldable wings for storage and transport. To produce the aircraft, Bede formed a company in Cleveland Ohio, the Bede Aviation Corporation, but the BD-1 never gained certification due to the FAA’s reluctance to accredit a light aircraft with folding wings. The subsequent certification process ended in Bede being pushed out by his business partners due to disagreements between him and company shareholders. The company was subsequently renamed American Aviation and the BD-1’s wings were reworked to a non-folding design with extended wing tips to improve rate-of-climb, an anti-servo tab on the elevator, a spring system to increase stability and stall strips to improve handling during a stall. American Aviation designated the redesigned aircraft as the AA-1 Yankee Clipper.

The AA-1 was certified under FAR Part 23 on 29 August 1967 with the first production AA-1 flying on 30 May 1968. The first 1969 models were delivered in 1968 with American Aviation producing 459 models of the AA-1 Yankee Clipper between 1969 and 1971. Shortly after, American Aviation modified the NACA 64-415 airfoil used on the AA-1′s wing to soften the aircraft’s stall characteristics and allow for a lower approach speed. These modifications culminated in a new designation, the AA-1A Trainer.

The Grumman light aircraft line was acquired by Gulfstream Aerospace in 1977 who formed it into their light aircraft division, Gulfstream American. The company undertook a major redesign of the AA-1B, resulting in the AA-1C. The AA-1C received a larger horizontal tail and a 115 hp Lycoming O-235-L2C high-compression engine designed for 100LL fuel. The AA-1C was marketed in two versions, which differed in their avionics and external trim packages. The AA-1C Lynx was targeted at private owners while the T-Cat was a flying school trainer.

The Yankee was originally designed to minimise the number of airframe parts used, with the aim of simplifying production and saving money. Due to the use of a non-tapered tubular spar, which doubled as the fuel tank, and the lack of wing washout, the wings could be exchanged left and right. The fin and horizontal stabilizers were interchangeable, as were the rudder, elevators, ailerons and flaps. While it did succeed in making production easier, this design led to compromised aerodynamics and was abandoned with the AA-1C by Gulfstream which involved wider-span elevators and horizontal stabilizers that produced better longitudinal stability and were no longer interchangeable with the rudder and fin.