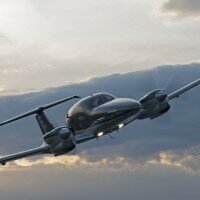 Diamond Aircraft had a hit on their hands when the company introduced the five-seater DA52 back in 2012, a plane so lovely that many thought it could never be further advanced. But, like painting a party hat on the Mona Lisa, they’ve made it even better, so we’d like to introduce you to the awe-inspiring five-to-seven-seater Diamond DA62.

In developing this aircraft, Diamond Aircraft founder and CEO Christian Dries challenged his team to create a simple-to-operate, fuel-efficient twin and wrap it around a passenger compartment mimicking the latest luxury SUVs.

This beautiful twin-engine aircraft keeps everything that was good about its predecessor, but improves on it. Trust us; it’s a little bit special.

In its five-seat configuration, this bird can hit 372km/h, while the extra two seats will only drop that speed by 5km/h. That’s right, it moves faster than free pizza at a Weight Watchers meeting, and makes it one of the quickest planes in its price range. Also available with seven seats, the DA62 is powered by two Austro Engine piston engines, which each burn about 22 litres per hour of Jet-A fuel. It can take off in less than 1,600 feet, climb at 1,200 feet per minute, and fly at altitudes up to 20,000 feet.

If you like staying in the air for a long time, the DA62 is the plane for you, because it has a range of well over 2000km, even when fully loaded with passengers and luggage. That means you won’t have to make an annoying stop in Dubbo on your way to the French Riviera.

The cockpit features a state-of-the-art Garmin G1000 integrated flight deck, which provides a luxurious flying experience. You don’t need to leave your personal luxuries behind either, as the DA62 is able to carry plenty of bags in its huge rear and front baggage compartments. If you want to haul the sets for the next Star Wars movie, the third row which has two seats, can be removed to open up even more room for baggage!

A change in the production process has removed restrictions on paint options: now the carbon fibre composite airframe can be finished in any paint or colour scheme you like, so you can truly customise your lovely new frame.  The previous test planes came in all-white however, one of the new demonstration models sport a two-tone metallic grey paint scheme with white accent stripes which looks pretty flash.

There’s really nothing to complain about with the DA62, because it’s a joy to ride in, whether you’re behind the controls or relaxing in one of its comfortable seats. Every moment from takeoff to landing is an absolute dream, with every factor covered by this brilliant machine. 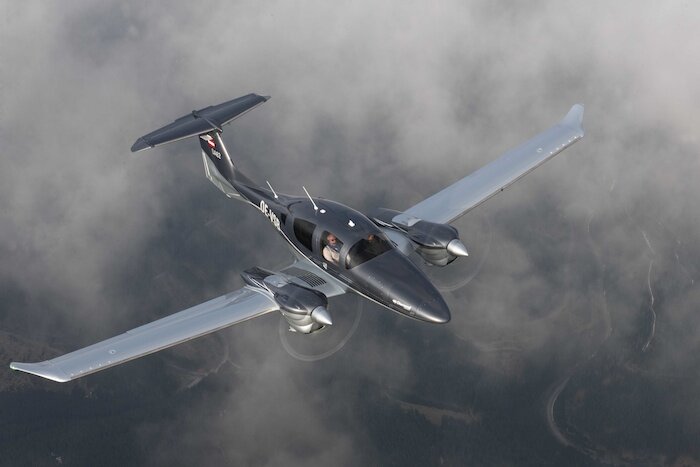 But don’t just take our word for it.

Nick Jones, Vice President, Aircraft Sales, Hawker Pacific, the sole distributor for Diamond Aircraft in Australia and New Zealand, explains that the Diamond DA62 is an aviation solution that has never been offered before in this region.

“It’s incredible to have the high performance and safety of a multi-engine aircraft, while still having reduced maintenance and fuel burn thanks to the ultra-efficient, 180hp 2.0L turbo diesel engines and ergonomic airframe design. On a test flight in2015, with full fuel and three (3) POB, I saw a TAS into the early 190’s at 10,000’, an average climb of 1500FPM and a single engine climb of 500FPM. All this while burning similar fuel to your high performance piston singles! Pull the power back and you can expect to see a TAS of around 170KTAS and a fuel burn of under 50LPH combined! The oxygen and turbo charged engine means you can travel into the flight levels when the winds are favourable, getting up there very quickly. If the winds aren’t favourable up high, you won’t see a fuel burn penalty meaning you’re always going to cover some serious ground in the DA62.”

So what does this new twin mean for an Aussie aviation family? The DA62 can comfortably take a family of seven, their bags and travel over 500nm. Then thanks to its high performance, FIKI, oxygen and weather radar, it provides a reliable and comfortable business machine. With the ability of travelling between any two cities in Australia with only one fuel stop and the legs to get from Sydney to Auckland direct, the DA62 will change the game for the owner pilot, looking for that next aircraft to step up into without having the training requirements and operating costs of turbines and jet aircraft.

Thanks to the FADEC and auto feather feature, the transition to a twin is now safe and feasible and Aussie-friendly, thanks to the team at Hawker Pacific who are bringing a demonstration aircraft to our shores in June and July this year.  The demonstrator will feature almost all options, with the focus on Traffic, Air conditioning, TKS anti-ice and a full Garmin weather radar.

The DA62 will also be targeted to Charter operators thanks to its generous payload, safety features and economy and, as such, the DA62 has been earmarked as the next ‘air taxi’ in the USA and with FAA certification early 2016, Diamond Aircraft are expecting a heap of orders to be taken for that precise purpose.

With the roominess of the cabin, the advanced avionics and the overall performance of the DA62, you may feel like an airline captain. A compelling mix of distinctive styling, consistent lightweight carbon design and superior flying dynamics is what the DA62 ultimately delivers.