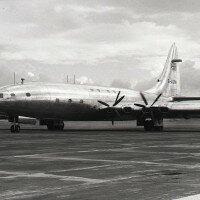 A couple of years shy of the end of World War 2, the British government met to investigate the needs of the British civil airliner market. Seeking a large, luxurious transatlantic airliner, the government eventually endorsed the Bristol Brabazon, a huge propeller-driven aeroplane designed by the Bristol Aeroplane Company.

Similar in size to the iconic Boeing 747 and oozing luxury, the Brabazon was an impressive design showcased favourably at London Heathrow Airport and the Farnborough and Paris air shows. But unfortunately, the airlines kept their distance and refused to commit to an aeroplane considered too big and too expensive to operate.

Imagine an aircraft design larger than the Boeing 747. A luxurious aircraft with full-length upper and lower decks and enclosed sleeping berths for 80 passengers. Add a dining room, 37-seat cinema, promenade and bar; or day seats for 150 people. Now imagine flying in such luxury across the Atlantic Ocean. This is what the British government envisaged when at the end of 1944 it endorsed the Bristol Brabazon, an airliner it hoped would secure the needs of post-war British commerce and industry.

In 1943, aviation pioneer and conservative politician, John Moore-Brabazon (otherwise known as Baron Brabazon of Tara) headed a government committee to investigate the needs of the British civil airliner market. The committee delivered a report, known as the”Brabazon Report”, which recommended the construction of three aircraft designs: Type I, a large transatlantic airliner; Type III, a smaller airliner for routes throughout the British Empire; and Type IV, a jet airliner the British hoped would provide technological advancement and prestige for the war-ravaged empire.

The Bristol Aeroplane Company responded to the report by modifying a previously abandoned design for a long range heavy bomber to produce the far-sighted Brabazon concept. So impressed was Baron Brabazon’s committee that it awarded Bristol a contract for two prototypes. The company eventually received £12 million of government money for the project, one that insiders believed would see the renaissance of Britain’s civil aircraft manufacturing industry.

The Brabazon demanded state-of-the-art construction techniques and many technical advances. Indeed, the sheer size of the aircraft posed a serious weight problem. In an effort to save tons of metal, several non-standard gauges of skinning were used to tailor every panel to the strength required; while the massive wingspan and mounting of the engines close inboard, together with structural weight economies, demanded some new measures to prevent bending of wing surfaces in turbulence. This concept foreshadowed the fine tolerances and optimal manufacturing processes standard in the aircraft construction industry today.

Powered by eight Bristol Centaurus 18-cylinder radial engines nested in pairs in the wings, the Bristol Brabazon was designed to include a 177 ft (54 m) fuselage with 230 ft (70.1 m) wingspan (35 ft/11 m greater than a Boeing 747); while the Centaurus engines powered eight paired contra-rotating propellers on four forward-facing nacelles.

The Brabazon Report specifically recommended that the aircraft be designed for luxury, demanding 200 ft³ (6 m³) of room for every passenger, and 270 ft³ (8 m³) for luxury; similar dimensions to the space available within the interior of a small car. The report’s recommendation was based on the belief that the Brabazon’s affluent passengers would demand such extravagance, but in hindsight, such extravagance proved to be one of the reasons for the aircraft’s eventual downfall.

The Brabazon featured technologies such as electric engine controls, high-pressure hydraulics to operate the flying surfaces, and cabin pressurisation. After considering the proposed layout of the aircraft, the committee changed its mind and recommended a narrower fuselage designed for 50 passengers. BOAC preferred a 25-passenger design and an agreement between Bristol and the airline led to a compromised interior layout that included six compartments for six passengers each; one compartment for three passengers; 38 seats arranged around tables in groups of four; and a rear area with 23 seats in a cinema with a cocktail bar and lounge. 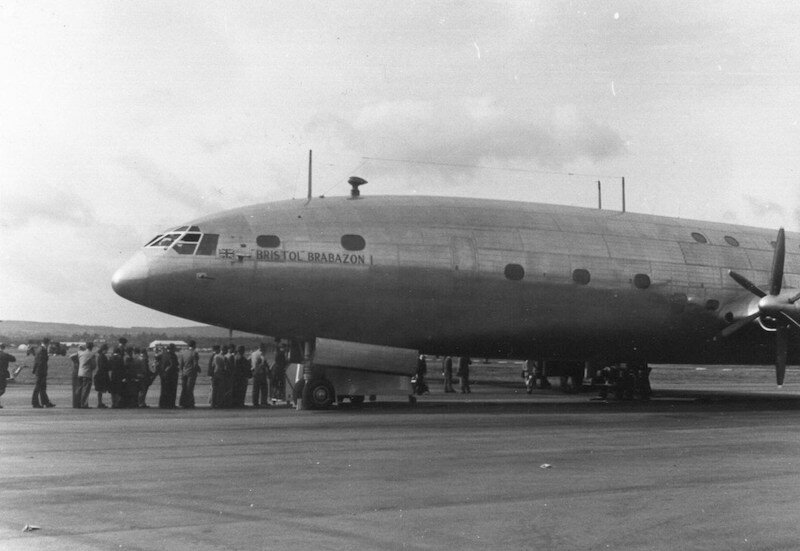 As one of the largest aircraft in the world, the Brabazon was too big for Bristol’s existing factory at Bristol Filton Airport, and the 2,000 ft (610 m) runway was too short to launch it. To accommodate the luxury mega-liner, a new hangar had to be built and the runway was lengthened to 8,000 ft (2,440 m), a project that required the re-location of residents of the nearby village of Charlton. Indeed, the Brazabon’s 230 ft wingspan was greater than that of any modern airliner except the Airbus A380.

A year after the end of World War II (1946) a second prototype based on Bristol Coupled Proteus turboprop engines was designed, increasing cruising speed from 260 to 330 mph (420-530 km/h), while reducing the empty weight by around 10,000 lb (4,540 kg). In theory, these amendements would have enabled the Brabazon Mark II to cross the Atlantic (London-New York) in a reduced time of 12 hours.

On 4th September 1949, Bristol Aeroplane Company’s chief test pilot Bill Pegg flew the Mk.I prototype for the first time. Its performance comfortably matched specifications, and although some strengthening was required around the propeller mountings, the design was free of serious problems. Pegg flew the aircraft around the Bristol area and in a test flight lasting 25 minutes, reached about 3,000 ft (910 m) at 160 mph (257 km/h) and landed at 115 mph (185 km/h), throttling back at 50 ft (15 m). Four days later, the Brabazon was presented at the Society of British Aircraft Constructors’ Airshow at Farnborough before serious testing began. It was demonstrated at the 1950 Farnborough Airshow with a takeoff, clean configuration flypast and a landing. In June 1950, it visited London’s Heathrow Airport, making a number of successful takeoffs and landings, and was demonstrated at the 1951 Paris Air Show.

Test pilots enjoyed flying the aircraft while test passengers loved the smooth ride and spacious interior. Unfortunately, BOAC had by this stage lost interest in the design and although some interest was shown by BEA on flying the prototype itself, the aircraft never received an airworthiness certificate. The second prototype never made it off the production line and in 1953, the world’s first and only Bristol Brabazon – the high flying luxury liner of the future – was unceremoniously scrapped. With no interest from civil or military users, the government simply could not justify continuing to spend money on the project. About £6 million had been spent and a further £2 million would be required to complete the Mark II. In October 1953, after 164 flights totalling 382 hours flying time, the first prototype was broken up, along with the uncompleted Mk.II prototype. All that remains are a few parts at the Bristol Industrial Museum and Scotland’s National Museum of Flight.

The Brabazon may have failed to materialise as a luxury transatlantic airliner but the project did reap some reward.

At least 50 per cent of the money spent on the project was used to develop infrastructure, including £6 million for large hangars and the runway at Filton. This enabled Bristol to continue production of other aircraft and the hall was used for building the Britannia. In addition, many of the techniques developed as a part of the Brabazon project were applicable to any aircraft, not just airliners.

Bristol had also won the contract for the Type III aircraft, which they delivered as the Britannia. Using all of the advancements of the Brabazon meant the Britannia had the best payload fraction of any aircraft up to that point, and it kept that record for a number of years. Although the Britannia was delayed after problems with the Type IV, the de Havilland Comet, it went on to be a workhorse for many airlines into the 1970s.

In hindsight, the Bristol Brabazon was an aircraft ahead of its time. In post-war Europe, people were impoverished from the ravages of a six year conflict and travel was a luxury they simply couldn’t afford; especially in an aeroplane designed for the affluent. However, when the Boeing 747 took to the skies at the end of the 1960s, the travelling public possessed far more disposable income and a desire to see the world. The immense Brabazon offered technologies and amenities that were simply not in demand. The world wasn’t ready, the timing was completely wrong.

Today, air travel is nothing more than a mode of transport, one that has made the world a smaller place. More and more people travel the world and more appreciate the comfort and convenience of mega-jumbos such as the A380, which, like its long forgotten predecessor, has luxuries such as sleeping berths, cocktail bars, and casinos.

As the Boeing 747 and A380 have proved, there is a need for such graceful aircraft. It’s simply a matter of timing. Unfortunately for the Brabazon, timing proved to be its Achilles heel. 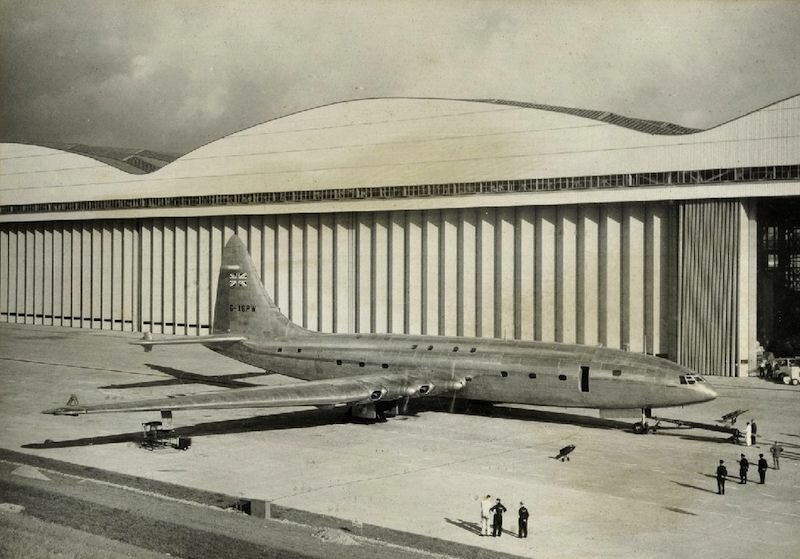