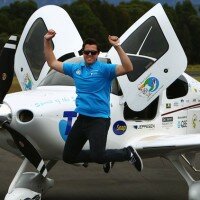 Teenager Ryan Campbell was last month scheduled to depart from Wollongong in a Cirrus SR22 in an attempt to break the world record for youngest person – and first teenager – to fly a single-engine aircraft solo around the world. The 19-year-old pilot from Merimbula on the NSW South Coast will cover 24,000 nautical miles, including 28 stops in 14 countries over a 10 week period. Derek Royal spoke to Ryan and discovered a mature young man confident of earning a special place in aviation history.

So what inspires someone so young to pursue such an unlikely dream?

“I just love flying and it has been a part of my life since I dreamt of being a pilot as a six-year-old,” Ryan says. I have always wanted to fly around the world but what I am setting out to achieve is not going to be easy. Fewer people have flown solo around the world than have been into space. But after setting so many aged-based goals it seemed a further challenge to try and become the youngest. After some research I found out that it may be more achievable than I thought.  I googled Ken Evers, a former round the world pilot, and Dick Smith. After emailing both men I received a response from each. Dick offered his support and experience gained from five around the world flights, Ken and I spoke back and forth over four weeks before he offered to be my mentor. After this I realised just how serious it was so I put a proposal together and went to ask mum and dad, I hadn’t told anyone at all up to that point.”

Team Campbell began to materialise and with his parents’ blessing, the youngster remained focussed and determined that his dream would become reality. “Mum and dad’s response was fantastic,” he says. “I think it had something to do with having just dried the dishes … But both of them have been very supportive from the beginning, whether or not they (or I) ever expected it to become this big is another thing! My Uncle and flying instructor both passed on the same support, and this was a huge confidence booster and led to the next step.”

Campbell is also determined to encourage other young people to aim for the stars, using the publicity from his trip to promote Youth in Aviation and World Youth International’s ‘Dare 2 Dream’ scholarship fund.

“The second reason for my journey is to inspire young people to chase their dreams like I am pursuing mine.

“I want to show other young people by my example that there are ways to have the adrenalin and excitement they are looking for whilst achieving something they may never have thought possible. Really, not only am I trying to inspire youth to take flight, but for their dreams to take flight too, in whatever field that may be.”

Given his desire to encourage youngsters to pursue their dreams, it’s not surprising to learn that Ryan’s passion for flight emerged after visiting the flightdeck of a Boeing 737 at the age of six. “I was amazed at the buttons, switches and the two pilots that sat up the front to fly such a machine,” he says. “From then on I told anyone that would listen that I wanted to be a ‘Jumbo Jet’ pilot. That dream has never changed.”

With his family sporting a true aviation heritage, Ryan didn’t have to look far for motivation. His grandfather and father are private pilots; his uncle owns Merimbula Air Services; one brother is a commercial pilot and the other recently began his flight training.

But despite having such a strong family connection to aviation, as a teenager Ryan assumed he would have to pass his driver’s licence before he could even consider learning to fly an aeroplane. A newspaper article suggested otherwise and proved to be the catalyst to pursue his dream at a young age.

“I was reading the local newspaper and came across a young guy who soloed on his fifteenth birthday,” Ryan explains. “I was so jealous. I then set the same goal, found a job, learnt in GA and then became familiar in a Skyfox Gazelle shortly before flying solo on my fifteenth birthday.”

The wheels were set in motion. Ryan continued flying in GA until he turned 16 when he passed his GFPT, enabling him to take family and friends on joyflights. He then earned his PPL at 17 and a year later, became the proud owner of a commerical pilots’ licence.

Thrilled with his achievements, Ryan then began working for his uncle as a scenic/charter pilot at Merimbula Flying Services and continued his aviation education by completing his instrument flight rating, a skill that is sure to come in handy on his round-the-world adventure.

When asked what has been the biggest challenge in preparing for his odyssey so far, Ryan states the obvious – “flinding an aeroplane”. “It’s very important as it’s a long swim,” he quips. The youngster also found the fundrasing side a challenge, because, as he says, “I am a pilot and don’t have a degree in marketing. But this meant I have had to learn and adapt to so many different things. The challenge to juggle every email, every question, jobs and then to fundraise and flight plan is interesting.

Ryan is flying a Cirrus SR22 G3 GTS equipped with a sophisticated Perspective avionics system. “I have flown the SR20 before but only stepped into the SR22 recently, it does everything the same but better. I still take photos of the groundspeed to send to other mates who fly, it is not often I get to see 200 knots GS with a good tail wind. Other than an hour or two with the (Garmin) G1000 I haven’t flown glass at all. It surprised me how easy it was to pick up. The best thing is that all the information you would ever need is there somewhere, you just need to find it. There’s still a lot of little things to learn with the avionics but I will have lots of time to do that.”

Looking ahead to his flight, Ryan anticipates many different challenges on his adventure. “I think different parts of the flight will have different challenges. Long legs over the Pacific, weather across the North Atlantic, airspace and traffic through Europe and the red tape and culture shock of Egypt through to Indonesia. No doubt so many back to back busy days will be tiring.”

Excited by the challenge, Ryan is confident he has the team that will help him achieve his dream of becoming the youngest pilot to circumnavigate the world. “I have the greatest team and wealth of experience available to me whenever I need it,” he says. “Also I have used this team to plan the flight as thoroughly as possible. The day I take off will be very full on but I hope to get into a rhythm as I gain more experience.”

Ryan says he is confident, but not complacent and will treat his journey as no different to any other day in the cockpit. “My aim has been to soak up other peoples’ experience where possible as my own is very limited. The challenges are huge but thorough planning will make for the smoothest possible ride.”

Ryan explains that planning for his journey has taken around two years, a period in which he has had to sacrifice things that are “normal” in order to pursue his dream. His one relaxation is going for a surf and “maybe watching a movie, although I have seen the first 20 minutes and last 30 minutes of Iron Man 3 – the middle was an hour long chat to my mentor in the movie foyer. It will be great to relax when this is all over!”

Once he returns from his incredible journey, Ryan Campbell will have completed a once-in-a-lifetime experience, joining the many great aviation pioneers who have paved the way throughout history. So does he think he will continue to pursue a career in aviation?

“I am positive my career will always be based within the aviation industry. Eventually I would like to be settled in an airline and flying a Pitts or similar on the weekends. Until then I want to gain as much experience in GA as possible, I love aerobatics and would like to somehow find my way into the warbird area. I think it must be every pilot’s dream to fly a P51 around the clouds.”

It’s probably fair to say that most pilots do dream about incredible feats, including travelling the world alone. Few however, have been bold enough to combine the two and believe they could fly solo around the earth. Ryan Campbell is about to become a member of a very exclusive club.