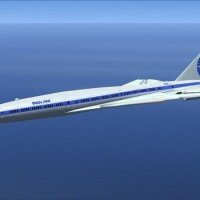 Can you imagine a supersonic aircraft flying in Qantas livery? Well, that could have been the case during the 1970s after the flying kangaroo ordered six Boeing 2707 supersonic transports (SSTs), the American version of the Concorde. So what was the B2707 project and what happened to it? Why did it ultimately fail while, between 1976 and 2003, the Concorde thrived?

EARLY STUDIES
Boeing first began working on a number of small-scale SST studies as early as 1952 and six years later, established a research committee that proposed a variety of alternative designs, all under the name Model 733. In 1960 a competition was held for a 150-seat trans-Atlantic SST, with a swing-wing design winning the spoils.

CONCORDE
The U.S. was shocked when the Anglo-French Concorde project was announced in November 1962, sending the U.S. aviation industry into a tailspin. Despite marginal economics, the British and French governments embraced the Concorde project, not only on the grounds of the prestige such an enterprise would bring, but also because it was widely believed that almost all future commercial aircraft would be supersonic. The last thing the Americans wanted was to be left behind by the Europeans, prompting new Federal Aviation Authority (FAA) director Najeeb Halaby to warn that failure to enter the SST market would be a stunning setback for the U.S., a claim that was met with much scepticism. Undeterred, Halaby fired a letter to President John F Kennedy suggesting that if the U.S. did not immediately start their own SST effort, local carriers would be forced to turn to foreign suppliers; the U.S. would lose 50,000 jobs, $4 billion in income and $3 billion in capital. The Americans then conceded that Concorde was too far ahead in the supersonic race, ditching the idea of designing a competitor on the trans-Atlantic route to instead focus on the U.S. domestic network. This decision was to prove costly.

In spite of vocal opponents and extremely negative reports about its economic viability, the SST project gathered momentum, with strong support from industry and the FAA. Pan American Airlines announced they had placed options on the Concorde, with company president Juan Trippe stating that the airline would not ignore the SST market, and without an American option, wouldn’t hesitate to add the Concorde to its impressive fleet. 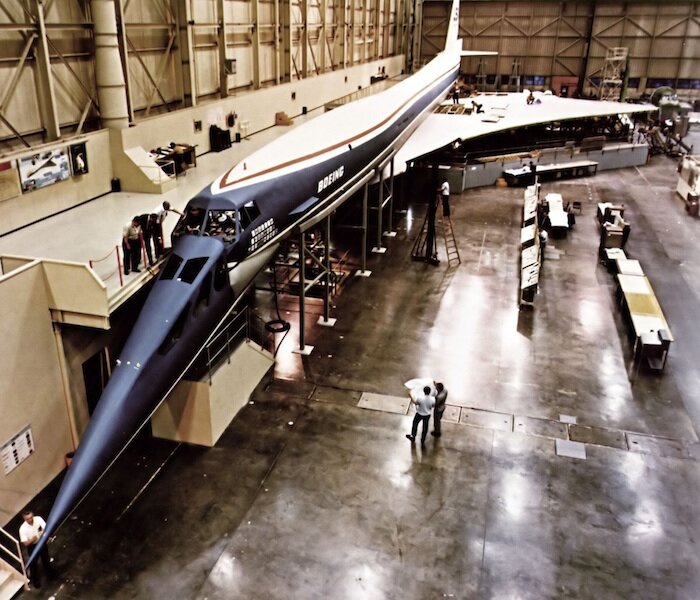 DESIGN COMPETITION
Requests for Proposals were sent out to Boeing, Lockheed, and North American for the airframes; and Curtiss-Wright, General Electric and Pratt & Whitney for engines. It was estimated there would be a market for 500 SSTs by 1990 and even though a design had yet to be selected, orders from airlines were swift, with preliminary designs submitted to the FAA in January 1964.

Boeing’s entry was virtually identical to the swing-wing Model 733 studied in 1960. Four engines were mounted in individual nacelles, the blended wing root spanned almost all of the cabin area, and the aircraft had a much more chunky look than later models. The wing featured extensive high-lift devices on both the leading and trailing edges, minimising the thrust setting, and noise created, during climb. The proposal also included fuselage stretches that increased capacity from the normal 150 seats to 227.

Lockheed’s entry, the CL-823, was essentially an enlarged Concorde, featuring a long and skinny fuselage, engines podded under the wing, and a compound delta platform. The aircraft also lacked any form of high-lift devices on the wings, relying on engine power and long runways for takeoff, creating a huge noise footprint. The only major design difference was the use of individual pods for the engines, rather than pairs. The CL-823 was the largest of the first-round entries, with typical seating for 218.

The North American NAC-60 was essentially a scaled-up B-70 with a less tapered fuselage and new compound-delta wing. The design retained the high-mounted canard and box-like engine area under the fuselage. Compared to the other designs, the rounded nose profile and more cylindrical cross-section gave the NAC-60 a decidedly more conventional look than the other entries. It also meant it flew slower, at M2.65.

The NAC-60 was eliminated from the process, with the Boeing and Lockheed designs progressing to the next stage. The successful companies were asked to offer SST models meeting FAA requirements and given the option of using Pratt & Whitney or General Electric engines. In November, another design review was held, and by this time the Boeing design had morphed into a 250-seat model, the Model 733-290. Due to concerns about jet blast, the four engines were moved to a position underneath an enlarged tailplane. When the wings were in their swept-back position, they merged with the tailplane to produce a delta-wing platform.

Both the Boeing 733-390 and Lockheed L-2000 designs were presented in September 1966, along with full-scale mock-ups. A lengthy review followed, and on December 31, 1966, Boeing was announced as the winner. The design would be powered by General Electric GE4/J5 engines.

REFINING THE DESIGN
The -390 was an advanced design. It was one of the earliest wide-bodies, with a 2-3-2 row seating arrangement. The SST mock-up included overhead storage with restraining nets, as well as large drop-in bins between sections of the aircraft. The main 247-seat tourist-class cabin featured an entertainment system consisting of retractable televisions placed between every sixth row in the overhead storage. In the 30-seat first-class area, every pair of seats included smaller televisions in a console between seats.

Boeing predicted that construction of the SST prototypes would begin in early 1967, with first flight in early 1970. Production aircraft would start being built in early 1969, with the flight testing in late 1972 and certification by mid-1974.

A major change in the design came when Boeing added canards behind the nose—adding more weight. The swing-wing mechanism also created severe weight problems and the design was unable to achieve sufficient range. Flexing of the fuselage (it would have been the longest ever built) threatened to make control difficult. In October 1968, the company abandoned the variable geometry wing, reverting to a tailed delta fixed wing. The new design was also smaller, seating 234, and known as the Model 2707-300. Work began on a full-sized mock-up and two prototypes in September 1969, two years behind schedule. By this time Concorde’s flight test program was already underway. The Boeing program had a long way to go.

ENVIRONMENTAL CONCERNS
By this point, the opposition to the project was becoming increasingly vocal. Environmentalists were the most influential group, voicing concerns about possible depletion of the ozone layer due to the high altitude flights, and about noise at airports and sonic booms.

The latter became the most significant rallying point, and in 1967 Dr. William Shurcliff, a Harvard University scientist, organised the Citizens League Against the Sonic Boom.  Soon, the group began to distribute arguments condemning supersonic flights over populated areas.  Other scientists hypothesised that the exhaust from SSTs, expelled into the atmosphere at high altitude, would start a self-perpetuating chemical reaction that would ultimately deplete a radiation-absorbing layer of ozone in the stratosphere and bring on an increase in skin cancer.

Few of these claims were anything more than poorly documented conjecture, but they were enough to incite the public against the SST.

The cause was picked up by the Sierra Club, the National Wildlife Federation and the Wilderness Society. Supersonic flight over land in the United States was eventually banned, and several states added additional restrictions or banned the Concorde outright.

The project also suffered political opposition from the left, which disliked the government subsidising the development of a commercial aircraft to be used by private enterprise, a campaign which became a crusade against unnecessary spending by the federal government.

Halaby attempted to dismiss these concerns, stating “The supersonics are coming as surely as tomorrow. You will be flying one version or another by 1980 and be trying to remember what the great debate was all about.” 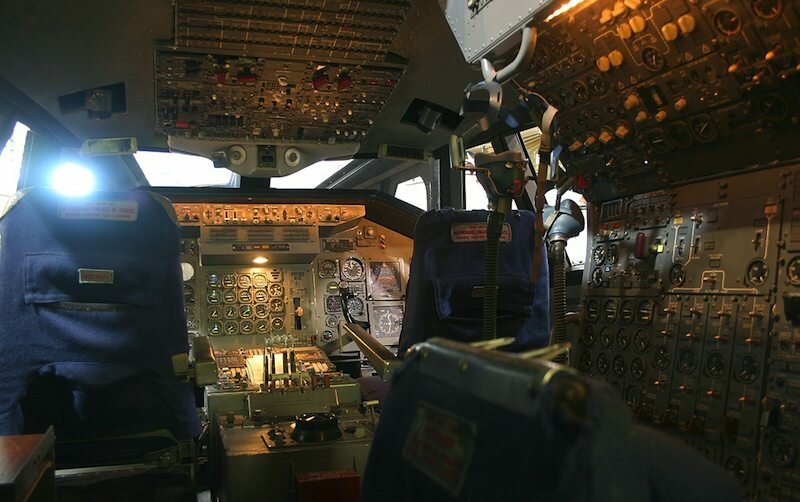 GOVERNMENT FUNDING CUT
As resistance grew, Congress began to express doubts about the plane.  President Richard Nixon, shortly after he was elected in 1968, appointed a 12-member committee to report on the project.  Believing like Presidents Kennedy and Johnson before him that the plane was essential to American prestige, Nixon hoped that the committee’s report would be a favourable one.  Instead, it blasted the SST not only on environmental grounds but on economic ones as well.

A counterattack was organised by the “National Committee for an American SST”, which urged supporters to donate $1 to keep the program alive. Letters of support from aviation aficionados, containing nearly $1 million worth of contributions, poured in. Labour unions also supported the SST project, as they worried that the culmination of both the Vietnam War and Project Apollo space program would lead to mass unemployment in the aviation sector.

In spite of this newfound support, the House of Representatives also voted to end SST funding on 20 May, 1971. The vote was highly contentious. At the time, there were 115 unfilled orders by 25 airlines, including six from Qantas; while Concorde had 74 orders from 16 customers. The two prototypes were never completed. Due to the loss of several government contracts and a downturn in the civilian aviation market, Boeing reduced its number of employees by more than 60,000. The SST became known as “the airplane that almost ate Seattle.”

Legacy
The supercritical aerofoil, developed for the SST, is now a standard feature of jet aircraft.

A Concorde sits at Seattle’s Museum of Flight, just a few blocks from the building where the original Boeing 2707 mock-up was housed. And while the Soviet Tu-144 SST had a short service life, Concorde was a success, flying as a small luxury fleet from 1976 until 2003, for British Airways and Air France on the niche trans-Atlantic market. Unfortunately, rising maintenance costs eventually saw profits slump, causing an inevitable end to an aviation icon.

Many designs have been studied since, but it is unlikely similar aircraft will be economically feasible in the foreseeable future. Boeing’s Future of Flight museum has the story and models of all of its production jetliners, and Concorde, but not the SST project. All that remains of the Boeing SST is a forward fuselage now on display at the Hiller Aviation Museum of San Carlos, California. A sad resting place for a remarkable project. 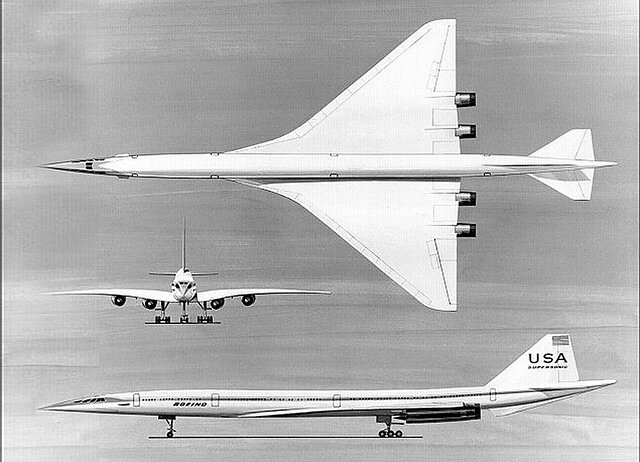