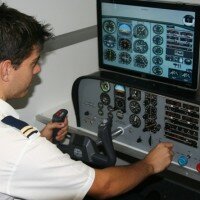 Simulator training is recognised as being important for larger aircraft but has been previously uneconomic for general aviation. These days it’s better understood that a combination of simulator training and training in a real aircraft makes for a better, safer pilot.

The simulator’s greatest strength is its ability to train students to deal with any conceivable emergency situation, which would not be possible to replicate in a real aircraft. In addition, there are direct benefits for the business of aviation. Where a shchool operates their own aircraft, insurance premiums and wear and tear can be reduced. There is also less time spent taxiing aircraft around and transiting in order to practise manoeuvres.

In 1986, a leader in flight simulator development conducted a study to compare the accident rates of piston-twin pilots who had trained in a simulator to those who had not. This study analysed US-registered Cessna and Piper piston twin-engine aircraft that were involved in fatal accidents during the years 1983 and 1984.

Out of 12,810 of these aircraft, there were 53 fatal accidents in the two years under study. In 89% of the accidents, the NTSB determined that ‘pilot error’ was the primary cause or a major contributing factor. 38% of the accidents were due to improper IFR procedures or decision making. Engine failure with subsequent loss of control was the next most frequent cause, accounting for 13% of the accidents.

The typical pilot involved in a fatal accident had an average total flight time of 3,225 hours with 420 hours in type. 69% held Commercial or ATP certificates. Four of the 53 fatal-accident pilots-in-command had more than 10,000 flight hours.

During the study period, 1,521 pilots underwent simulator training in Cessna and Piper piston twin simulators. Statistically, a randomly-selected group of 1,521 piston-twin pilots would have been expected to include approximately six pilots who were involved in a fatal accident.

But in fact, none of the 1,521 simulator trained pilots were involved in a fatal accident. (The probability of this occurring strictly by chance is less than one percent.) This and other statistical studies show clearly that pilots who receive regular recurrent training have far lower accident rates than those who don’t.

A sim allows you to be trained to deal with nearly any conceivable emergency situation. Around a third of the malfunctions and emergencies practised in a sim can’t be practised in an aircraft, either because they’re impossible to duplicate, for example a propeller over speed, or are just too dangerous, such as flying with a heavy airframe icing.

The dismal GA accident rate during low-visual approaches, particularly at night, is a testament to the inadequacy of our training. Shooting approaches under the hood is simply inadequate preparation for doing the same thing in actual low-visibility conditions. The most difficult parts of doing this in a single-pilot cockpit, scanning between the gauges and the windshield and deciding whether or not adequate visual references are available to make the landing, are never practiced.

A simulator also provides a more efficient training environment than an aircraft. Pilot and instructor don’t waste valuable time in taxiing out, waiting for an ATC release or flying to the training area or to an airport where the desired approach is available. In the same time it takes to fly an instrument approach in the aircraft and fly back to the airfield, you might do three, four or five approaches in the simulator. If you get confused or make a mistake, the instructor can ‘freeze’ the sim and discuss the situation with you, or even back up a few miles and let you try again.

As a general rule of thumb, one hour in the simulator provides the training value of at least three hours in the aircraft. Sim training is such an intense experience that most training programmes limit pilots to two hours of left-seat time per day.

Finally, in-aircraft training tends to be a lot tougher on aircraft than normal operations. Stalls, slow flight, missed approaches and especially engine cuts can generate a lot of wear and tear on the equipment. Staying proficient while at the same time treating an aircraft with TLC should make simulator training essential to the aircraft owner.

CASA ATO and Moorabbin Flying Services CFI, Gary Smyth says there is little financial benefit to sim training in the early days of training. “There isn’t a lot of financial benefit and, more importantly, the time can’t be logged, so is valuable training time that won’t contribute to their hours”.

MFS intends to continue on with its successful simulator program and believes the sim is a far less stressful form of training than in flight training on a time limit. “For IFR training, we can generate extreme weather conditions, for example flying into thunderstorms or icing conditions, which you would never want to encounter in a real aircraft for the sake of experience.”

Asked when is a good time to start using a sim in the training syllabus, Gary said, “Further down the track in training is the best way to make good use of a simulator and not detract from the need to accumulate actual logged flying time.”

“Flight Sim for home use is very popular, so most students have some experience before actually taking to the air. And, as a business, we need to fly aircraft to remain profitable.”

All of their staff use the simulator for IFR currency and hope to see the development of more type specific motion sims for light aircraft IFR training. 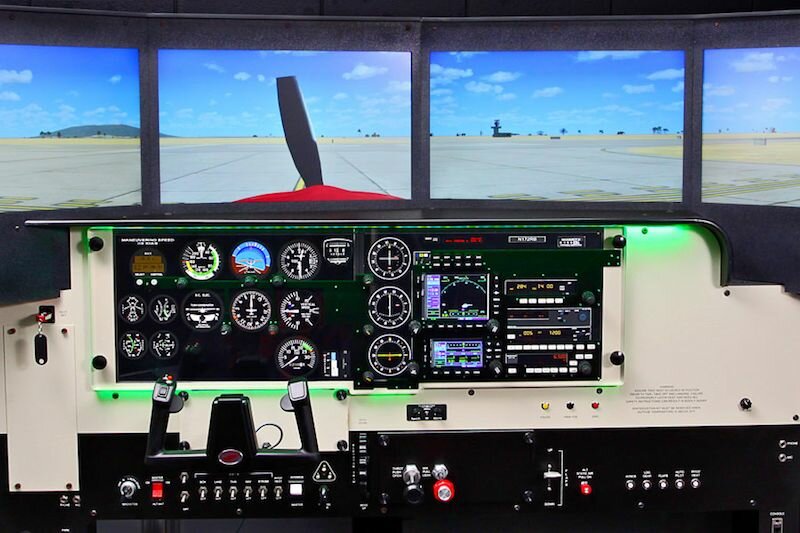