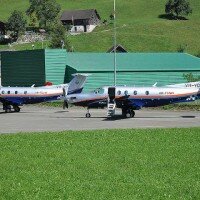 IT’S midday and pilot Trevor Woods arrives at the Northern Territory Police Air Section hangar. He has been informed that his mission for the day is to collect prisoners at Borroloola, some 656 miles from Darwin; and Maningrida, an indigenous community located 500km east of Darwin, in Arnhem Land. The 51-year-old doesn’t expect to return to base until early this evening.

Trevor examines the Area 80 briefing for the relevant TAF’s, area forecast’s and NOTAMS. The weather’s not looking too flash, with a dangerous concoction of reduced visibility (1,000 metres), thunderstorms and rain awaiting the PC-12. Trevor’s departure time is 0530 Zulu and despite the skuddy weather that lies ahead, he’s thankful that, by departure time, all the Tindal RAAF base’s restricted areas will be de-activated, not only saving him extra track miles and altitude restrictions, but also time and fuel.

Trevor’s ride is “Yankee Delta Quebec”, a PC-12NG he recently ferried with Alice Springs pilot Tony Norris to Darwin from Pilatus headquarters in Stans, Switzerland. The PC-12 is an excellent aircraft for NT Police operations because of its robustness and ability to cope well in the harsh tropical environment of the Northern Territory. The Police operate the nine-seat passenger commuter version of the plane and are able to remove the rear seat in a matter of seconds to set up a cargo net and have a cargo area large enough to accommodate freight, baggage and specialist equipment required for Police operations. The large rear cargo door facilitates easy loading and unloading and the Douglas track tie-down system provides ample tie-down points for bulky items. 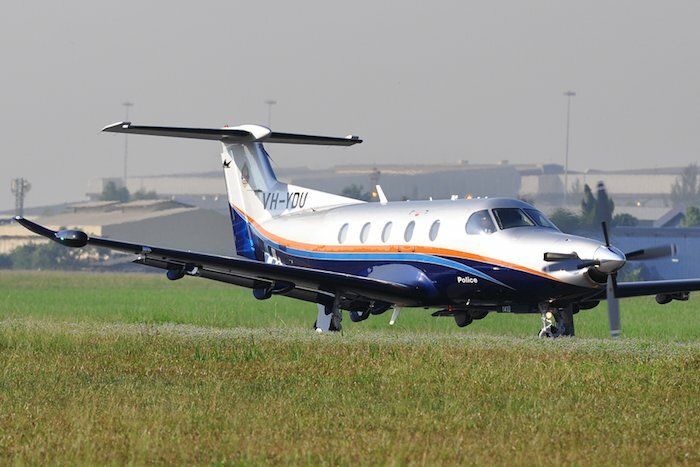 Trevor has refuelled YDQ to full (2,650 pounds due to Darwin’s tropical climate) and has calculated that on this mission, he will be travelling 1,019 nautical miles and logging 267 minutes flight time. The operations manual stipulates a requirement for carrying holding fuel, therefore Trevor will need to refuel at Borroloola.

At 1440 local time, the police prisoner escorts arrive at the hangar and after Trevor briefs them about the flight and the risk assessments of the prisoners, they walk to the PC-12 and climb aboard. From the left-hand seat of the cockpit, Trevor completes a passenger brief and works through his checklist.

“The PC12 NG is different to some GA aircraft,” Trevor explains. “The generators, avionics, bleed air ACM, air conditioning and blower fans, et cetera, are all left on during shutdown so when the aircraft is started again, these systems all turn on automatically.”

Yankee Delta Quebec goes through its self-test modes and everything is okay. Before-taxi checks are completed and Trevor requests a taxi clearance from Darwin Ground on frequency 121.80. Due to Standard Operating Procedures, the PC-12 requires the full length of Runway 29 to depart; Darwin Ground clears Trevor to proceed. “Yankee Delta Quebec, taxi Bravo two, two-nine, off blocks time is fourteen fifty two Local,” says the ground operator. Trevor replies and goes through normal taxi checks before receiving an airways clearance. He gives an emergency brief to his passengers and is cleared to lineup behind a Cessna 210 on short final for a departure from Runway 29. Trevor waits at Alpha 6 and completes the line up check list. The tower gives him his departure clearance and Trevor checks the radar, noticing 4-5 thunderstorm cells on his departure track some 10-20 miles out of Darwin. Making a mental note of the ordinary weather, he begins his takeoff roll and slowly manoeuvres the condition lever. As the landscape rushes by on his takeoff roll, he checks the engine instruments, takeoff power and airspeed, and rotates at 80 knots. The nose of the Pilatus points skywards and the plane pierces the sky.

At 200 feet AGL Trevor retracts the undercarriage and allows the plane to accelerate to a climb speed of 140 knots. He then makes a radio call to Darwin Approach on 134.10  “Darwin approach, Yankee Delta Quebec, TOMAS 3, passing 1500 on climb to 6000, request 15 nautical miles right of track due weather”. The weather diversion is approved and he is handed over to Brisbane Centre on 129.85. At Charles Point he is clear of the weather and tracks directly to TOMAS, the Top of Descent point (TOD) for Port Keats.

Trevor conducts a visual approach into Port Keats. Wind is from the north, north west and on downwind he selects 15 degrees of flap and brings the airspeed back to 165 knots IAS. He lowers the gear and on finals the PC-12 is aiming for the numbers at 88 knots. Trevor pulls off a decent landing and after a bit of braking, slowly moves the condition lever to ground idle and starts the timer for what is known as the two minute cool down period. Flaps are up, after landing check list is complete, and SAR is cancelled with Flight Watch on HF 8843. Trevor then notes the flight time from the FMS (42 minutes) and completes the shutdown sequence. All done, Trevor sits back and breathes a sigh of relief before mentally preparing for the next leg to Borroloola. 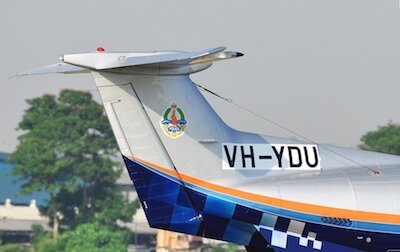 “Prior to the PC-12 the NT Police operated Piper Navajo aircraft,” Philip explains. “As per current day operations the NT Police require reliable, comfortable and capable aircraft to support remote Police operations. Being pressurised, higher performance with an excellence range, the PC-12 is capable of transporting Police to just about any remote location across the Territory without the requirement to stop for fuel.

“Both the (brand new) NG and (older model) Legacy versions of the PC-12 are excellent aircraft for our operation. The Legacy aircraft has served us well for many years but the NG provides an added payload capability of approximately 180 kilos, which is beneficial when we are carring nine passengers who like to take some of the comforts of home with them. This improved performace of the NG over the Legacy is also welcome where we usually achieve an additional 20 to 30 knots in the cruise. Also, the situational awareness the Honeywell Primus Apex avionics suite provides the pilot is excellent, especially because we normally operate under single-pilot ops and need to facilitate quick 15-minute turnarounds at remote locations, which is vital when we may have five to six sectors on any one flight. The large pilot and co-pilot PFDs and two MFDs provides the pilot with a huge amount of information at any one time. It’s also user-friendly and a pleasure to operate.”

Most of the NT Police’s work is fairly routine where flights are usually built up over a number of days meeting travel requirements for personnel travel and freight from a number of different Police units. This typically involves major crime detectives, new personnel deployment to remote stations, technical support personnel and equipment for communications maintenance, infrastructure maintenance including housing, vehicles and boats.

“We aim to utilise the aircraft as efficiently as possible but when the urgency exists we will change our plans to meet the higher priority,” Philip says. “This could be a search for an overdue boat or the TRG may need to respond to a remote critical incident or ground search for a missing person. We also provide air transport for the convenience of prisoners from remote communities to Darwin or Alice Springs. This may follow a court session at some of the larger communities or when a person is remanded to attend court in darwin or Alice Springs.”

The local Police member from Port Keats climbs on board, straps himself into a seat and the door is closed. Trevor enters the next leg of the flight plan into the FMS and he’s ready to go. He then taxies the aircraft at 1600 Local and departs Port Keats four minutes later, tracking towards Borroloola via Tindal and Snood. The planned cruise altitude is FL 230 and once established there, Trevor sets the Mode Control Panel (MCP) from the book. The following numbers are presented: TAS 254, GS 264kts, IAS 172, ITT 780, TQ 26.8 psi, Prop 1700RPM, FF 393lbs, OAT – 12c and fuel on board 2015 lbs.

At 60 nautical miles west of Tindal, Trevor requests to fly 10nm right of track due to thunderstorms. Brisbane Control clears him to do so and he tracks directly for Snood. Approaching Snood, more weather diversions are required but eventually the PC-12 leaves the weather behind and Borroloola looms on the horizon. A Cessna Conquest has just departed McArthur River Mine for Darwin. He is restricted to FL220 until radar identified and clear of the PC-12. Trevor gives Brisbane Centre his inbound radial (287 radial Borroloola) and he picks up the conquest on TCAS about 15nm to his right. This holds up his descent into Borroloola. To catch his descent profile, he increases the descent rate to 2000 feet per minute and reduces the power to 15psi which settles the IAS to 210 knots. There’s a bit of VFR traffic to contend with too. A Cessna 210 also inbound from the west, is due to land at Borroloola at 0810 Zulu, just two minutes before Trevor’s estimated arrival at the same airfield. The 210 touches down on Runway 02, and Trevor’s slows his aircraft down. He turns mid downwind for Runway 02 as the 210 exits the bitumen and again, greases the landing. Time: 1747 Local. Flight time: one hour and 45 minutes. Trevor shuts the aircraft down at the fuel bowser, puts in 635 litres of JET A1 fuel and adds some prist anti-ice. Two Robinson 44 helicopters land while he’s refuelling. Borroloola airfield is busy today. 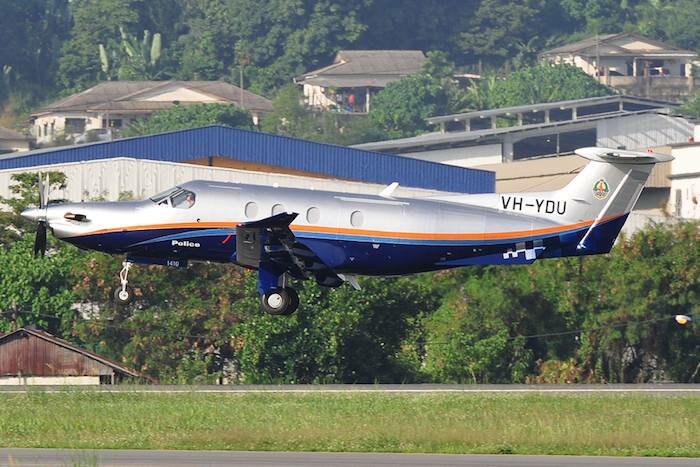 The last prisoner is loaded onto the aircraft and Trevor taxies for the final leg to Darwin – home sweet home. The PC-12 lifts off at 1950 Local and tracks to Darwin. After a largely uneventful flight and an hour’s flying time, Trevor arrives via the 29ILS at Darwin Airport, landing the the PC-12 at 2050 Local. Total flying time for the day: 4.7 hours.

The prisoners alight from the aircraft and Yankee Delta Quebec is manoeuvred into the hangar, ready for a well-deserved first 100 hourly service. Since arriving in Darwin from Switzerland, the brand new PC-12 has fitted into police operations rather nicely, performing with expected aplomb. Trevor Woods’ day has been a busy one. Be interesting to see what tomorrow brings.