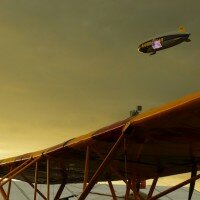 Where can you experience flying demonstrations of an F35, Airbus 350, Harrier Jump Jet, rocket-powered bi-plane and a rocket-powered school bus, together with veteran aircraft in huge numbers and a re-creation of the Pearl Harbor attack, all in the one day? Oshkosh EAA Airventure 2015!  Chris Stott, CFI Central West Flying, provides an insight into what is arguably the world’s greatest airshow.

Aussies have converged on Oshkosh in big numbers each year since the 1970s – and this year was no exception.  One hundred and one Australian aviation aficionados registered at the International Centre in the EAA grounds for the July event and many others were there but didn’t register. In the all-nations flag parade on day 5, Australia was the second biggest represented foreign country behind Canada.

One group of 24 organised by Bathurst based Central West Flying School enjoyed the experience for six days and have contributed to this report, with feedback and photos.

The Bathurst contingent made a 13 day pilgrimage starting with two nights in San Francisco, to break the journey, and finishing with two nights in Chicago to experience the charm and history of this lake-side city. At Oshkosh we stayed on the campus of University of Wisconsin, in dorm style accommodation, which added to the ‘summer camp’ atmosphere and helped build camaraderie and new friendships.  Meals on campus were ‘all you can eat’ buffet style and a nearby bar was open to all hours for drinks, snacks and the sharing of aviation ‘war-stories’; a great place to meet other travellers from all over the world.

The numbers at Oshkosh are simply amazing. The city of just 55,000 inhabitants deals with the onslaught of over 500,000 visitors during the week of the show. They arrive on commuter airlines, in private aircraft (12,700 in the parking lines this year) and mobile homes (more than 30,000) and regular vehicles, to create a sea of temporary habitation.

Despite these almost daunting numbers, Oshkosh city folk and the EAA (Experimental Aircraft Association) have this exercise planned and orchestrated to military precision.

Starting with the continuous shuttle buses from downtown and the university campus direct to the airfield and the ever-helpful people manning the reception centre, to hospitality tents with free water and free wifi, air-conditioned and very clean toilets, the first impression is just so comforting knowing that this is not going to be the sometimes less organised, hot and dusty way of some major events. 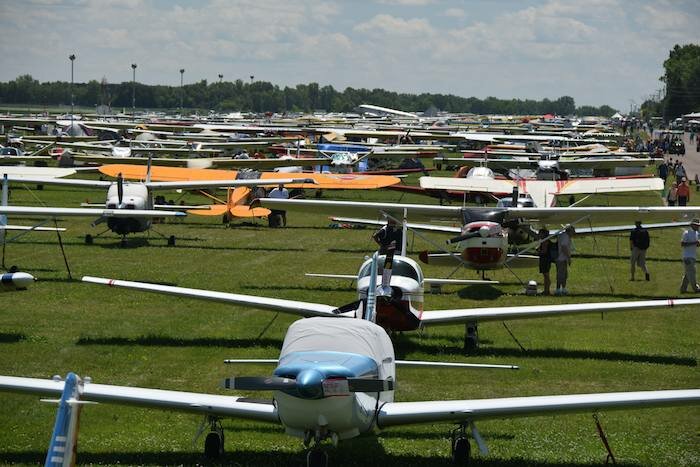 However, visitors still need to be organised. The competition for accommodation is fierce – we booked our airfares and uni digs 12 months ahead, all arranged by fellow pilot and aircraft owner, Greg Tucker, through his business ‘Panorama Cruise and Travel’ in Bathurst.  Greg had done Oshkosh before and that local knowledge was invaluable.  Greg briefed us on things like layout of the grounds and tips on short-cuts and where to meet and rest during the day. We re-grouped at the end of day 2 of the show and shared highlights so others could take suggestions on board.

A special EAA newspaper (free) is printed every day and dropped off at all major accommodations, containing highlights and background stories on the activities of each day. Also the official program lists events and exhibitors and maps – and most importantly – a daily schedule of all the free educational and entertainment forums – more than 300 of them over the week! Choosing and prioritising the forums you want to attend is a major exercise!

So what did our group see and experience? Most of us did a walk around of the main site on day one.  If you run out of puff, there are free hop-on hop-off shuttle carriages behind tractors running all the time. At a guess, on foot, it takes 4 – 5 hours to traverse all the laneways between exhibitors and forum sites in soft browsing mode. But this gives a good feel for what you want to come back and check out in more detail on the following days.  We quickly discovered the free neck and shoulder massage facility in the Ford / Lincoln marquee and booked a session to help deal with the rigours of walking and rubber-necking. You do need a sun hat – temperatures this year were a relatively mild 30 degrees Celsius but in past years have been up to 38 – and a water bottle (filling stations are scattered around, so you don’t need to buy water). The humidity is high but sun-burn factor not too bad, as the USA has an ozone layer!

From 2:30pm to 6pm each day is a mega airshow with flying displays ranging from fly-pasts of the heavier aircraft to full-on aerobatics and staged re-creations of famous air battles in the original aircraft.

From 6pm to 9pm each day there is a live band (some big names and lesser knowns, including Dierks Bentley, Kenny Loggins and Blue Sky Riders) on a “Big Day Out” sized stage, which is free for all.

On two nights there is a twilight airshow that is an incredible experience – aircraft fitted with strobes, LEDs, flares and pyrotechnics. Some deploy ‘upside down fireworks’ – like a fireworks display from the ground except that these are being fired down at the crowd from 1,000 feet above. A ground run on the main runway by a converted school bus with a 6,000 pound jet engine, made for quite a spectacle, visually and aurally!

The full A to Z of aeroplane makers and related industries are there in the static displays.  From Airbus to Zenith and more than 600 in between.

There is even a seaplane park, which is a short (20 minute) bus ride from the main field. There you will find another 20+ types of seaplanes and amphibians, with static displays and flying / landing demonstrations.

So what did we see and do that went on our highlights list? 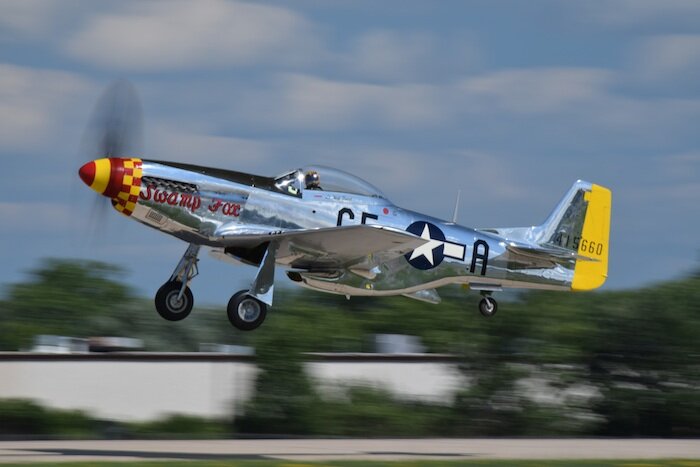 Well the F35A (performing its civilian debut) and F22 Raptor rate right up there. And, best of all, when they were parked on the ground you could wander up and touch and feel them and talk to the crew.  Some aircraft were available for on-board inspection at no charge and others, including old war-birds, offered joy flights for a reasonable fee. Helicopter rides around the field were just $45 and a great way to get an overview.

An Airbus 350 XWB flew some impressive low-level manoeuvres and was open for inspection. Similarly a host of WWII aircraft like the US Navy Privateer, Superfortress and T6 Texan, British Lancaster, Mosquitos, Mustangs and more than 100 other warbirds drew big crowds. A F100 Super Sabre and B-52 Stratofortress made their first appearances this year.  The main runway lights had to be temporarily removed for the B-52 to land!

We were blown away by the spectacle of a Waco biplane, with its traditional radial engine supplemented by a 4,500 pound thrust jet engine. Aerobatics champion, Jeff Boerboon, would plod over the field with the radial engine managing about 90 knots, then would point the nose up vertically and ignite the jet engine, at which point it would become a rocket and climb vertically for several thousand feet amid a mighty roar of jet exhaust. It is aptly named “Screaming Sasquatch”.

A new concept this year grabbed a lot of attention – a drone cage with 8 metre high netting to contain the drones and allow experts and novices to strut their stuff through an aerial obstacle course, with the supplied quad-copters. It was educational and entertaining.

And, speaking of education, those 300+ free forums were extremely interesting, informative and entertaining.  We sat in on some of the Women in Aviation forums and my partner (also a pilot) got to meet and chat with the first African-American female combat pilot, Vernice Armour who served in Iraq, and Dr. Kathryn Sullivan, one of the first six women selected to join the NASA astronaut corps in 1978 and the first American woman to walk in space.

We (and about 1200 others) really enjoyed the presentation by Apollo 13 Astronauts Jim Lovell and Fred Haise and their NASA Mission Control colleagues for that fateful journey, Milt Windler, and Bill Reeves.  A smaller audience was kept spell-bound by the story told by Aussie Richard Champion de Crespigny, the Captain of Qantas Flight 32, an Airbus A380 that suffered an uncontained engine failure in 2010 and made an emergency landing at Singapore Changi Airport. A Rolls-Royce Trent 900 had a missing turbine disc and the aircraft had damage to the nacelle, wing, fuel system, landing gear, flight controls, and engine speed controls.

And how about our non-full-on-aviation oriented fellow travellers?  Easy answer – those few who arrived at Oshkosh as ‘accompanying persons’, went away from Oshkosh as converts. Not just because they gained a greater insight to and understanding of aviation generally and enjoyed the airshows, but because of the huge array of things to see and do away from aviation – everything from arts and crafts to cooking lessons and wellness programs.  This, together with the amazing hospitality of the Oshkoshites and friendliness of all attendees, made us feel just so welcome (even though the locals overuse that phrase). The food (at pubs, restaurants and cafes off the aerodrome) was great, queues on the field were not long and the efficiency of a well-oiled execution machine made it all the more enjoyable.  Oh, and did I mention the free neck and shoulder massages? Anyone who has even a remote interest in flying has to have Oshkosh on their bucket list. 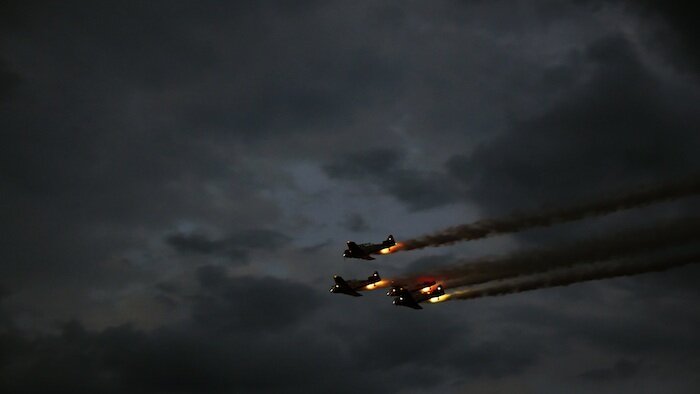