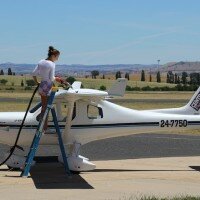 Sixteen-year-old Gabby Elias has been fascinated by flying ever since she was a wee girl growing up on the family farm. With an ambition to fly fast jets in the RAAF, Gabby recently took the first step towards achieving her dream when she began training for her RA pilot’s licence. In the first of a series of articles, Gabby provides an insight into her flight training journey.

I grew up in Nyngan, NSW and live on a small property in the state’s Central West. My parents manage Nyngan Toyota and my grandfather owns the business. When I was much younger, we owned a mixed enterprise farm near Tottenham, NSW and would go out there regularly. Dad had an RA pilot’s licence and would fly us around the farm in his Thruster (microlight) aeroplane, which became more and more exciting as I grew up and began to understand the basics of how to keep it under control.

Flying without doors is one of my most enjoyable memories of the farm but when we sold the property, dad also sold the plane after walking away from two forced landings. He decided that his three children – two sons and a daughter – were more important than his passion for flight. After selling the plane, it was hard to stay interested in flying as we were in an isolated area with little air traffic.

Growing up in the bush and having two older brothers, it was only natural that I’d have interests similar to them. Whenever we visited the farm, I never did the typical “girly” things such as wearing pink and squealing when licked by a big dog. Instead, I wanted to be like my brothers and to this day I’ve never grown out of the “wanna be like the boys” stage. Everything they do, I do too: riding motorbikes, water skiing and, until the beginning of this year, clay target shooting. I even play rugby union and touch footy.

When I was nine, I learnt to ride a unicycle, which considerably improved my balance. A few years later, during my straight and level briefing, my flight instructor asked me to close my eyes and to try to balance on one leg. This, my instructor said, would teach me about the risks involved when flying in clouds and the dangers of spatial disorientation. I closed my eyes, stood on one leg and showed him that I had good stability and balance. I then revealed to him that I’d taught myself to ride a unicycle, not just as a bit of a novelty but also in acceptance of a challenge from my brothers. “You can’t ride a unicycle,” they said. So to prove them wrong, I simply went out and did it.

Sport also plays a big part in my life. As a boarding student at All Saints’ College, Bathurst, I this year represented the school’s firsts in netball and women’s seven’s rugby. I also played seven’s for Central West NSW, touch football for a private team and basketball for All Saints’ seconds. I’ve also represented the college at a high competitive level for athletics, swimming and cross country.

Since having my motorbike licence and being home for the weekends or school holidays, whenever I heard a plane from home, I’d look up hoping it was landing, put on my motorbike helmet and race out to the airport to watch it land. The plane would taxi past, and the pilot (and passengers) would give me a big smile and a wave. More than likely they’d also watch my eyes light up, perhaps knowing that I aspired to fly. I’d rush home, look up their registration and find out all the details about the plane; who owned it, year model, seats and even fuel consumption. Yep, that’s how interested I am in flying.

In 2013 I attended AusFly at Narromine, NSW; the premier annual event for recreational and sport aviators. It was there that I discovered a burning passion that’s uncommon among teenage girls: the desire to fly. I spoke to Ryan Campbell, who at 19 last year became the first teenager to fly around the world in a single-engine aircraft. We spoke about his epic journey and our common desire to fly and he encouraged and inspired me to begin flying lessons as soon as possible. He told me that because I was young, and didn’t have to worry about things like marriage, kids or paying off a mortgage, there was nothing to stop me from chasing my dream. He had such an impact on me that I talked about him the whole way home.

As we drove home, dad continued to educate me and further develop my knowledge on what flight training would be like and how long it would take. He also told me that flying was a big commitment and that there would be disadvantages such as ‘missing out’ on ‘other’ things. However, this didn’t bother me as I would be flying, so I actually wouldn’t be missing out on much at all!

After the holidays, dad and I embarked on the familiar four hour journey between our home in Nyngan and All Saints’ College. It was time to return to school. But when he continued driving to the Sydney side of Bathurst and turned into the road leading to the airport, I couldn’t believe my luck. I was so excited that I began to stutter, which must have been amusing for my dad because I’m normally such a chatterbox. I was completely overwhelmed. Being raised in a country town, growing up on red soil (and lots of mud when it rained) on a small property, I wasn’t the type of girl to cause a fuss, but this was something I thought was worth fussing over! I began flight training at Central West Flying School soon after that first visit.

I then discovered the Australian Women Pilots’ Association (AWPA), a well renowned support group that provides assistance to its members. I joined the association and at the annual conference and awards dinner night, was lucky enough to be seated alongside two female pilots from the RAAF. Being a nervous 16-year-old, I was unsure how to approach them, but I just took a deep breath and started talking. After chatting about possible careers and options in the Air Force, I was asked to take off my high heels, just to make sure I’d meet the height requirements. I did, which made it even better. I then decided to apply for Female Flight Camp (RAAF work experience) in which myself, and 16 other women were successful. I met some amazing girls there and am grateful for the experience. It was by far one of the most interesting and inspiring events of my short aviation career. 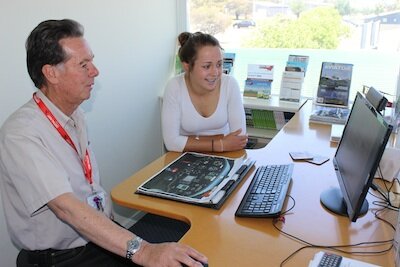 Not long after the AWPA Dinner, I was flying with my instructor and he told me that a RAAF C-130 Hercules would be visiting Bathurst as part of an Air Force recruitment campaign. The campaign was launched ahead of the Bathurst 1000 V8 Supercar race at Mt Panorama. Knowing I was a keen and aspiring Air Force pilot, my instructor picked me up from school for a lesson as per usual, just as the Hercules was leaving RAAF Base Amberley in Brisbane. We did a long brief of one hour and then took to the sky, hoping to still be airborne when the C-130 arrived around Bathurst airspace. Unfortunately, I landed before the Herc made an appearance, but I was there when the huge aircraft conducted a series of short field operations on the airport’s gravel strip, which is only 800 metres long.

I was so excited to see the Herc that a TV crew filming the event for the evening news noticed me and asked me to do an interview, on the spot and without preparation. Funnily enough, when I watched myself on television later that night, I noticed that I showed no signs of the nerves or anxiety I’d felt in front of the camera. In my opinion, you just have to put yourself out there.

People say they fly RA because it’s cheaper than GA. But I decided to fly RA due to a strong support network – my dad’s inspiration as a successful RA pilot; the convenience of the planes for agricultural and hobby use; and location. Cost was the last consideration.

Because I’ve started my aviation journey at such a young age, I have many career options at my fingertips. As mentioned, the RAAF appeals to me and after attending Flight Camp, I’ve decided that I’d love nothing more than to go straight to the top and fly fast jets. That would be awesome. In my spare time I love watching videos of air battles and humanitarian missions conducted by pilots who fly the F/A-18 Hornet and C-130 Hercules; so the military is definitely one option I’d love to explore.

While being an Air Force pilot is very appealing, being a vet is also something that has always interested me. Coming from a country town, establishing a “flying vet” business and creating a support network for isolated farmers and stations who struggle to obtain necessary resources (at a reasonable cost of course), would be amazing. The Air Force and “flying vet” options provide two completely different career paths, with each offering its own unique challenges.

So far, my flight training is going really well. I have completed the ab-initio phases such as “Effects of Controls”, “Straight and Level”, “Turning”, “Stalls”, “Forced Landings” and “Crosswind Landings”. Each was a challenge; but thankfully I’ve been successful in wrapping my head around it all.

When I first starting training, I learnt early that when flying, there is little room for error and you have to apply self-discipline to have full control of the plane and to respond to natural effects such as wind, thermals and topography effects. After completing my first few hours, Central West Flying School offered me a part scholarship, significantly reducing the cost of lessons. This much-appreciated assistance allows for faster completion of my RA licence with more flying hours in a short time. As I am at boarding school, I don’t have the option of part-time employment so the scholarship is a great help.

I’ve been flying plenty of hours lately and at the time of writing I’m pretty close to completing my first solo in the Jabiru J170. I’ve been told by many fellow pilots that your first solo is one of the best, most precise flights of your life as you’re concentrating and paying attention to everything just so you don’t screw up. I’m expecting it to be one of my most memorable experiences in aviation. I’ll tell to you all about it next time. 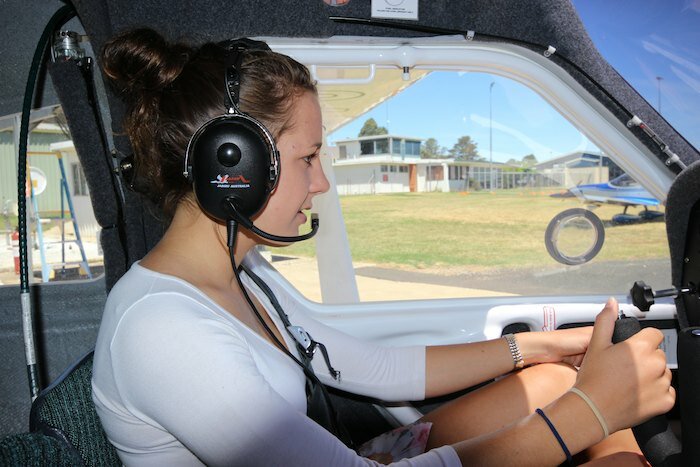