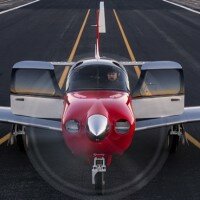 In a special evening event, Mooney International Corporation unveiled the latest generation of its legendary M20 aircraft for 2016. The aircraft has been designated the M20V Acclaim Ultra.

The new Acclaim Ultra features detail improvements to the overall fuselage – including a first-ever pilot door and composite-wrapped cabin, a clean-sheet interior design, and instrument panel enhancements – all of which will keep this flagship aircraft at the top of Mooney’s product line. And, with a speed of 242 kts, the new Acclaim Ultra will continue Mooney’s heritage of building the fastest production piston-engine aircraft in the world.