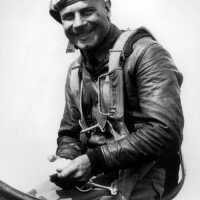 At Wright Field, now Wright-Patterson Air Force Base, Lieutenant James Doolittle was the first pilot to successfully perform an outside loop. Flying a Curtiss P-1B Hawk, he began the manoeuvre in level flight at 10,000 feet, then pushed the nose down into a dive. When he reached 450 kilometres per hour, Doolittle continued to pitch the nose down and the airplane flew through a complete vertical circle, with the pilot’s head to the outside of the loop. Doolittle attempted to repeat the outside loop at the 1929 Cleveland National Air Races, with a Curtiss P-1C. The airplane’s wings came off but Doolittle parachuted to safety.