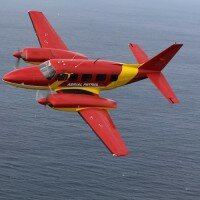 The Australian Aerial Patrol is a volunteer organisation that provides critical aerial support to communities throughout the NSW south coast and beyond. Derek Royal takes a ride with the patrol and comes away impressed by the experience.

I’m sitting in the back seat of the Australian Aerial Patrol’s Cessna 182 (Airpat 2), flying on a simulated aerial patrol between the organisation’s Wollongong Airport HQ and Stanwell Park. Our altitude is around 800 feet AGL and we’re approximately 100 metres off the coastline. Pilot Barry Sandry and radio operator Darryl Schlodder are busy going about their respective duties, while I’m acting as an observer (albeit an untrained one) whose primary goal is to spot anything unusual in the water. Seated next to me is the Patrol’s operations manager, Wayne Perry.

“The primary function of the aerial patrol is a viewing platform along the ocean edge,” explains Barry, who has been a volunteer with the organisation for around five years. “It encompasses looking for missing vessels, debris in the water, looking for rock fishermen, people on boats, anybody in distress, in addition to the obvious coastal activity of looking for predators and so forth in the water. The daily flights we do throughout the busy season are primarily focussed on that; but we’re also called on for search and rescue, crew transportation and other operations.”

Despite being a dull, overcast day, the water clarity from the air is good but for my untrained eyes being an observer is far more challenging than I first imagined.

“With observers in the back of the plane we’re not asking you to look out into the horizon, we’re asking you to look out at approximately one point five kilometres either side of the aircraft,” explains Darryl, who served in the Australian army for 25 years before joining the Patrol 10 years ago. “During the actual beach patrol we drop right down to about four hundred feet, so if you start looking out too far, the expanse is too big.”

So how common are sharks along the coastline?

“They’re very common,” replies Wayne, who, like Darryl, has put in a decade of service with the Patrol. “In fact, people don’t realise sharks are inquisitive and they like to swim alongside you to have a look at you. You’ve got no idea, they could be a metre away and you wouldn’t even know they were there. When you’re actually swimming in the water, you can’t actually see them, but from five hundred feet above the ground, you can.”

Established in 1957, the Patrol’s charter is to maintain the safety and welfare of the community through aerial observation and support. In 1993 that charter expanded to include Commonwealth accreditation as a Civil SAR Unit. 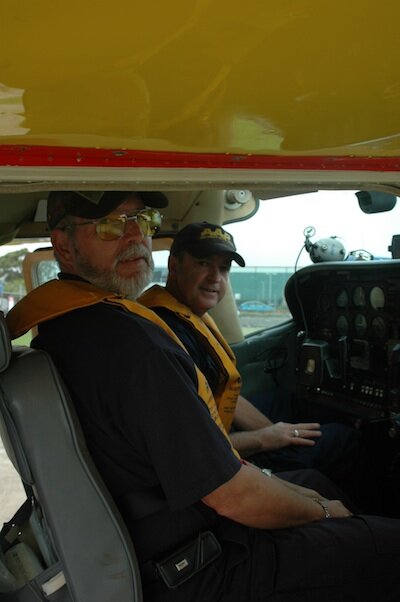 The appointment provided accreditation to both the Aerial Patrol and its highly trained volunteer crew to respond to emergency missions throughout southeastern Australia. Eight years later, the Patrol signed a contract with the Australian Maritime Safety Authority (AMSA) to provide the highest level of fixed wing SAR in Australia, with a 30 minute response time. As a Tier 1 SAR provider, the Patrol was one of just three such groups in the country.

The Patrol’s dedicated Piper Chieftain aircraft was fitted with a nose mounted FLIR camera and the interior was reconfigured to transport four qualified crew with full communications suites, two multi-person life rafts and a bilge pump, all of which could be expertly dropped to vessels or persons in distress in the ocean. The contract remained current until 2007 and since then, the AAP has focussed on its original charter of providing safety and welfare to the local community.

The Patrol’s area is widespread. Standard northern beach patrols extend from Wollongong to the Sydney beaches, while southern beach patrols embrace an area from Wollongong to Jervis Bay, Huskisson and surrounds. “We also fly other types of sorties inland or up the coast, covering anywhere from the Victorian border to the Queensland border,” Barry says. “If we’re tasked to go fly there we’ll go. If we’re asked to go somewhere by rural fire service or marine rescue or if we’re asked to take part in a multi-aircraft search, or go inland looking for missing bush walkers, we will. We’re happy to fly anywhere.”

The Patrol boasts a fleet of three aircraft, the Cessna 182, Partenavia and Piper Chieftain. The 182 is the primary observation platform and normally carries three or four crew. “We use the 182 to fly up and down the coast looking for stricken vessels,” explains Barry. “It’s used for our SAR patrols and because of our close proximity to the escarpment, we also keep an eye on the escarpment for any spot fires that break out. We have radios that are able to broadcast back to rural fire service. The Partenavia is a secondary viewing platform but also a drop aircraft, has the ability to drop out our heliboxes and life rafts and it has a bit quicker capability because it’s a twin engine and it can go a little bit further than the 182. Then we have the Chieftain, which we primarily use for crew transport, and covering larger distances out to sea for beacon search. Or, if somebody has been reported missing we can put more people on board and go a longer distance as well.”

So what qualities are needed to be an AAP pilot?

“Somebody who wants to give a bit of their time to a community service,” replies Barry. “As with all pilots I think you need to be clear headed and a smart thinker, and just people who are genuinely looking to add some hours to their time but who offer some community service at the same time.”

With the cost of flying at an all-time high, earning a commercial licence and gaining hours en route to employment can be a huge financial burden. But according to Barry, the Aerial Patrol provides a great opportunity for pilots looking to build up their hours.

“The cost of building up your hours after you’ve got your licence to get to a certain point where you are employable, is not cheap,” he explains. “We offer an opportunity to some of those pilots who have gone to the trouble of getting their commercial pilot’s licence to then build up their hours in a voluntary capacity – they get the flying time, we get to not have to pay for pilots. So I would urge anybody who is a pilot in training and looking to build up their hours, in both single and dual engine aircraft to make contact with us and see if we can be mutually beneficial friends.

“All our pilots are volunteers as are all of the crew,” adds Barry, who, because he doesn’t hold a commercial licence, is ineligible to fly on official missions. He instead enjoys dual roles as an observer and team marketing manager. “The pilots come on board as members of the aerial patrol, and then put themselves on a roster to go flying when needed. They need to be CPL-trained, they need to have a certain amount of hours, then our CFI takes them out and does some low level testing with them, and we will take a combination of pilots – people who are looking to build their hours, and also people we’ve trained as commercial pilots through NSW Air who are looking to build their hours as well. You don’t necessarily have to have been trained with us but if you’re available to fly and put yourself on the roster system then we’ll make use of you.” 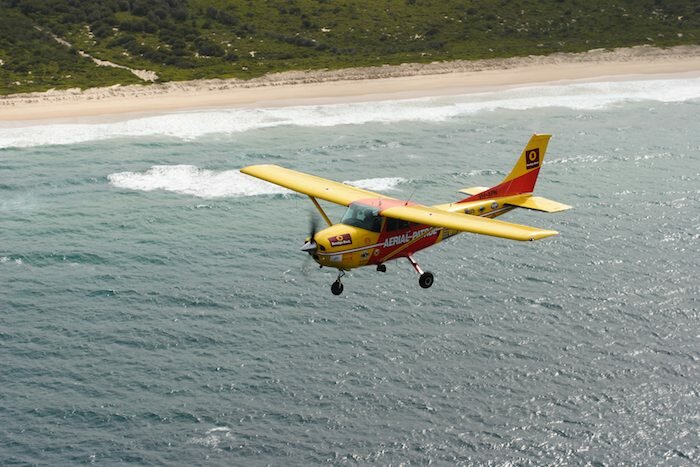 Given the critical nature of the work, surely there must be stringent qualifications expected of Patrol crew?

“Yes, everybody every year is required to pass basic fitness tests and swimming tests to be capable, if need be, to get out of the aircraft in an emergency,” Wayne explains. “Observers are put through a two-day course where they get to learn how to spot things in the water. And each year they’re updated with a reminder of the sorts of things we’re looking for.

Darryl then explains his role within the organisation. “As crew chief I do a briefing before each flight and remind people of what we’re out there looking for. The crew chief is somebody who is capable of handling the observers roles, rostering and so forth and ensuring we have the right staff on board. And then there’s the radio operator, who does a radio operators course and an aircraft familiarisation course. After 25 years in army communications, radio-wise there’s not much I don’t know.”

When asked to nominate the most satisfying part of his job, Barry is quick with his answer: “Just knowing that you’re able to provide a community service and do it in the capacity of something you really enjoy doing. I enjoy front seat and back seat flying, the Patrol has a good team of guys, they work hard, everyone has a laugh, and they’re very professional at what they do. I appreciate working with people who do what they do really well and these guys do that. It’s a lucky situation to be in.” 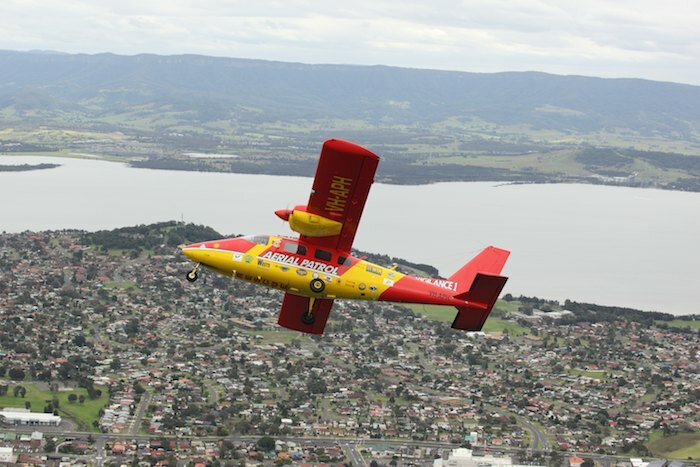