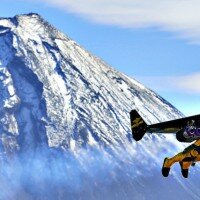 In 2006, former fighter pilot and Boeing 747 captain, Yves Rossy (now better known as Jetman) became the first man in aviation history to fly with a jet-propelled wing. The Swiss remains the only man to achieve this feat and continues to inspire people of all walks of life with his exploits and ability to push the flying envelope. Jetman recently took some time out to speak to Derek Royal. This is what he said.

When did you first dream of being a pilot and ultimately, human flight?

I didn’t always want to fly, you take your inspiration from those around you. When I was really young I first wanted to be a cook because my mother was such a good cook. Afterwards, I wanted to be a farmer with my uncle. And then, at 13 I’d been to an air show in Switzerland, and I was so impressed by the jet team from the Swiss Army. It was a time when the aeroplanes could fly over the public — the plane was coming so fast, so low, and pow! — a few seconds later, it disappeared behind a crest of a mountain. I was so impressed with the speed, sound, and the energy.

In regards to human flight; I was a pilot and flying hang gliders, paragliders, aerobatics aeroplanes, and then I discovered skydiving. Free fall. Free. With nothing around you, just a parachute on your back. And you go down. But you don’t feel like you’re going down. Total freedom. Flying like a bird. So the idea came: “Okay, how could I keep these pure feelings of flight as they are in free-fall, but change the vector? Keep your altitude, climb and have this feeling for longer.”

You started your flying career as a military pilot, then moved onto commercial airline flying, before taking the leap towards human flight as Jetman. What have been the highlights on each step along your aviation journey?

Has there been a time when your emotions turned from exhilaration to fear?

Once with a hang glider, I was attacked by an eagle. I saw something, it was coming from behind me on the right hand side, and I saw a shadow. And then I saw that I was on his territory. Without touching the wing, he was doing attacks. But it was scary because he’s big! And he flies much better. But it was fantastic afterwards, you know? You think, hey, he took me for big bird. Nice. It was not fear but exhilaration for sure!

There were times when I thought I should stop. The first time, it was after a very bad landing. I had a wing that worked, but there were very bad wind conditions. It was in the evening, and the wind just changed. I was in turbulence behind the trees. I crashed, with about 80 pounds of weight on me. Three rolls until I stopped. Normally, I should be in a wheelchair. But nothing. Not a scratch. Like Looney Tunes?!? It makes you think. I had to have a break, a few months.

The next one was when I released the wing. I was completely uncontrolled — with my engines on — turning and everything. I continued the flight. To get stability. But I was already low and it was going down. And then, suddenly, it’s too late for everything. The only thing that I could do was pull my parachute — normally you should be stable when you pull, because if not, then you have lines tangled around you, not good news. I knew that when I pulled the parachute. I thought, hey, if I have a line around my feet, I’m in trouble. Lucky me. I’m still here. But after? You think about that, and you say, I do not want that experience again and I took a six-month break.

But it’s my way of life. There is a Chinese proverb: What is important is not the goal or the target, it’s the way. And I’m doing that way. And it’s so rewarding to have a person coming after a show and saying: “Hey, thank you. You inspire me a lot”. And continue to make the dream come alive.

My project is really “experimental” so I was excited to share my project with other experimental enthusiasts and participate in the most prestigious and biggest aviation event in the world. We need the experimental world, to evolve, to push the boundaries of flight with innovation, and not only the big aviation factories, but at the level of the individuals who have the possibility to put their good ideas into practice and reality. The technology is in constant evolution, you need to adapt and be flexible to improve aviation projects. It was a pleasure to be with this audience, people who appreciate and understand the highs and the lows of a project like mine. 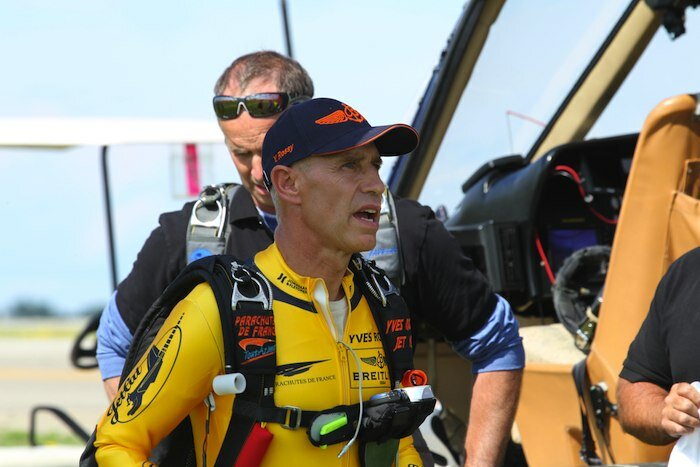 Can you describe some of the emotions and feelings you’ve experienced during flight as Jetman?

I was flying in the Grand Canyon, or in Rio — there are these perfect moments when you are in osmosis with the moment, the place, the elements. In Rio, I was crying in my helmet, saying, “thank you”, it was such a privilege, a perfect moment there.

How do you manage risk?

Many people think I am the crazy guy with this risky project but I do not accommodate the concept of “playing with death”. I play with life with freedom of the skies. I know my limits in aviation and skydiving and I leave margins, big margins for error – I do not take any unnecessary risk.

Risks are reduced by my aviation knowledge as a fighter pilot and commercial pilot. I know that I have my plan A, B and C. At any time I can eject the wing and it has its own parachute, and I have two on me. But the biggest escape plan I have is altitude. Everything I do is high, I have plenty of time to correct and adapt to think and react. Also I respect the conditions, I do not fly if the area is not suitable, I do not fly in poor visibility I do not fly in winds higher than 20 knots … I fly when it is safe.

I also have my team around me, I depend on them and they are world class. My engineer Andre Bernet who makes sure the wings are in 100 per cent condition, he starts my engines and monitors safety on the helicopter before I jump. Also, I have a sky diving expert, Bruno Brokken who oversees the conditions and safety of my parachutes, etc. With a lot to think about on these projects, three brains and six eyes are better than one. I am an experienced guy working with an experienced team on well thought through and planned projects. I am lucky to have such support.

What has been the most significant challenge for you as Jetman?

Keeping the project going with a small team needing sponsorship and permission. Permission is the problem that is clipping my wings. I am the first and I don’t fit into any ‘boxes’. I am not an aircraft, I am not just a skydiver, I am too fast to be an ultra-light. It is hard in every single country because I have to convince them that everything is ok! I have done over 600 Jetwing flights in countries around the world from Brazil, Japan, US and Europe but still in every country it can take years to get permission – and it can be infuriating and exhausting.

Since your first flight in 2006, what changes have you made to the wing?

This transition went through: sky surfing, small wings, glider wings, then a wing with two engines, then four, changing the designs of the wings, etc., until I have what I fly today. The changes have been very significant. I have had 15 different versions and prototypes of the wings.

I’d imagine you must be super fit to do what you do. What impact does each flight have on your body?

The principle physical quality needed is to be fit, I am meaning not like Schwarzenegger but in good physical condition. You need strong core muscles, the wing is heavy on the ground but in the air it is not so bad like a scuba tank in the water- it becomes weightless. But the difficultly when flying it is to maintain a certain rigidity in your body, with small movements. Against the resistance of the air it is sometimes hard on your neck.

Do you have a specific physical training program to keep you in tip-top shape? Does your fitness program become more intense closer to the flight?

Training is a daily task, most mornings I do 20 to 30 minutes of cardio exercise, such as running. Afterwards I do three series of 60 sit-ups, completed by some push-up and pull-ups. For my back, I try to do two hourly sessions of Pilates a week. Also I go three times a year in Spain to train, where I fly two times a day and test my new engines or my new figures depending on the development of my wing.

I also practice in various sports such as skiing, kitesurfing, kayaking, etc. It is really important to practice different sports in connection with nature (snow, water). Nature offers us good qualities to adapt to the environment. The recreational sports allow me to work my body while having fun with the elements of nature and develop a reactive mind to be able to adapt to unexpected situations.

How important is mental training?

It is important to be able to keep an ‘alert focus’ not to be too relaxed or complacent that you might miss something, but to remain calm in any situation with a clear mind and a good feeling. My mental training is ingrained from flying Mirages and fast jets, it’s the same requirements. The mind is the key reference and the number one point on the checklist is ‘Do I feel OK to fly today?’

Do you still fly aircraft for fun? If yes, what types are your favourites and how often do you fly?

Yes, I really enjoy to fly a Hawker Hunter that is run by a local organisation and Bucker Bi-plane in Bex, Switzerland.

How fast can you fly and at what altitude?

Now that you’ve completed your latest flight around Mt Fuji in Japan, will we see you in Australia any time soon?

We’ll see … You have beautiful places like the Sydney Opera House and one big rock (Uluru) right in the centre. As long as the permission Gods are smiling, you might see me soon! 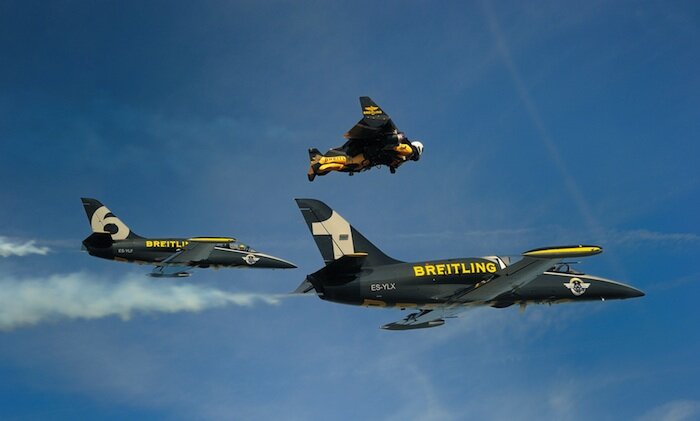