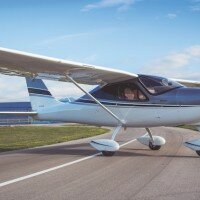 The Tecnam P2008 was introduced back in 2009, but it remains a highly advanced aircraft that provides a glimpse at the future of light sports aviation.

Whilst other manufacturers have aped its innovative features over the years, none have been able to dethrone it as the king of its category – and a number of recent improvements mean that the P2008 won’t lose its crown anytime soon.

The most notable feature of the P2008 is its heavy use of composite components – marking the first time that Tecnam had taken a step in this direction. The wings and other easily-knocked-around areas of the aircraft are made out of metal for increased durability, but large swathes of the P2008 have been carved out of high-tech composites. Not only does this reduce weight, but it improves the aerodynamics and reduces drag thanks to the smooth curves that are only available with composite materials.

Such a snazzy and light aircraft begs to be boosted by a beautiful engine, and the P2008 comes with a choice of three – the Rotax 912ULS, 914 Turbo and the 912iS. The 912ULS and 914 Turbo produce 100hp and 115hp respectively, which is more than enough, but it’s the third engine that we find most impressive.

The joy of flying the P2008 starts long before climbing into the sky. It’s a handsome machine, with all the Italian style that you’d expect from Tecnam. The sweeping lines and sensual curves certainly help it to stand out from the pack.

Climbing into the cabin is surprisingly easy, and gives the impression that the P2008 is larger than it actually is. The doors are comparatively huge, and there’s plenty of leg room once you’re seated inside, making it a great choice for those larger-than-life pilots out there. There’s also plenty of room for luggage behind the seats, ensuring the P2008 is perfectly suited for longer trips.

The updated JC model offers a set of custom-designed seats and seat rails which are easily operated and adjustable with a single handle, with a reinforced area between the rails to make cabin access even easier.

There are plenty of options when it comes to avionics, meaning that it’s possible to come up with a configuration that suits your flying style and your wallet. If you want the best of everything – the newest Garmin goodies, including the latest glass panel tech and GPS navigators – that’s certainly a possibility, but the standard set-up will prove to be perfectly capable for most pilots.

The guts of the P2008 can be customised to suit your needs, personality and flying style, and the outside of the plane can be tailored to your wishes as well. There’s an abundance of paint schemes and plenty of colours to splash all over it, making each P2008 its own beast. This is one of the most gorgeous little planes on the market, and it’s good to know that it can also be one of the most unique.

Alright, so the Tecnam P2008 looks fantastic, boasts great build quality, and is loaded up with top notch avionics, but what you really want to know is whether it flies well. If you could’ve seen the smile plastered across my face as I took it for a test run, you’d have an answer to your question. The fact is that Tecnam has knocked it out of the park with the P2008, because it flies like a dream.

After settling into the luxurious seats and having a quick glance at the easy-to-read control suite, I fired up the Rotax and was happy to hear it come to life without any hassle. The brains of the P2008 were quick to spring to life, and it was a surprisingly short time before I was ready to taxi off in preparation for my flight.

It controls well on the ground, making tight turns a breeze, and after giving it a brief run around the airfield, I was ready to send the P2008 into the clear blue sky. There’s a definite feeling of power while pummeling down the runway, but the cabin remains relatively quiet. The P2008 doesn’t need a whole lot of space to get off the ground, and once airborne I found myself climbing at well over 500fpm. It wasn’t long before I was looking down at the world far, far below through the aircraft’s extra-large windows – but my real interest lay with the P2008 and how it handles amongst the clouds!

The controls are incredibly responsive, and thanks to the composite construction I had an extra kick of power and manoeuvrability compared to similar planes. I soon discovered that turns can be achieved easily, climbing and descending is simple, and it’s a really enjoyable plane to be in charge of. I was able to crank my airspeed up to 120kts without breaking a sweat, and even at that speed the P2008 handled delightfully.

Putting the P2008 through its paces was absolutely thrilling, but I always felt in total control of the aircraft thanks to its sturdy build and reassuring avionics set-up.

For most recreational pilots, the P2008 will be a massive step up from what they’re used to, and during my test flight I was overwhelmed by the feeling of moving up a step as a pilot. It’s a seriously good aircraft that pushes the boundaries of its category. I would have loved to keep flying it as far as I could, but the owner wouldn’t have been happy with that, so I reluctantly headed back to the airfield.

From a personal point of view, landing a new aircraft is one of the great joys of aviation, because it casts a sharp focus on the finer points of the plane. I’m happy to say that the P2008 exceeded my expectations and was a joy to land. Descent was smooth, visibility was high, and I was able to make a soft touch-down. I’d like to take credit for that but, honestly, the P2008 could make any pilot look good. 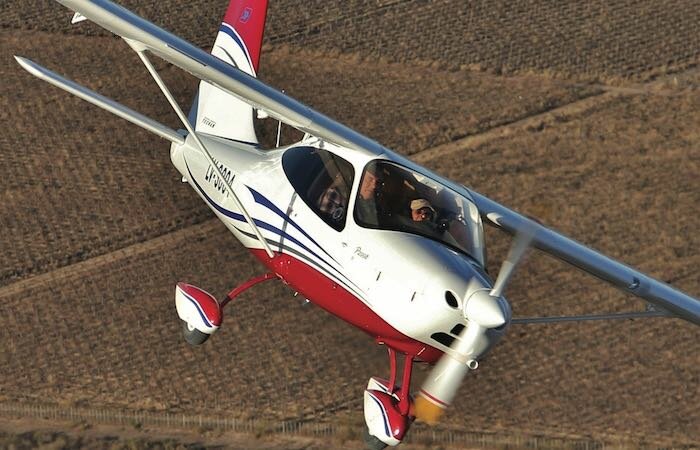 After whipping back to the hangar, I sadly climbed out of the cockpit – the oversized doors making it a doddle – and stood back to look at this exceptional aircraft. Brilliant design decisions, expert craftmanship, and a desire to incorporate the latest tech have led to an amazing light sports aircraft that is every bit as impressive in 2018 as it was in 2009.

And don’t just take my word for it. Graeme Boatman is, along with his business partner Val Kennedy, an Aussie sales agent for Tecnam. The duo have understandably given the P2008 a good workout.

“We’ve operated five P2008 aircraft since 2011, and have completed three flights across Australia and back. These flights were around 4700 nm each. We found the P2008 an extremely good touring aircraft for long outback trips, with good endurance and loads of space in the baggage compartment.

“Our experience has been that these aircraft appeal to the private owner/pilot who wishes to customise the avionics to their particular needs, and often plan to go with custom paint to individualise their aircraft as well.”

If you’re looking for a plane that will last you for many years, and still wow you every time you climb aboard, then the Tecnam P2008 is definitely worth having a look at. You get a whole lot of plane for your money, it’s incredibly friendly for pilots of any level, and it feels like it should cost a lot more than it does.

The only drawback is that when you’re not with your P2008, you’ll wish you were. Trust me, the P2008 is seriously addictive, in the very best way possible!