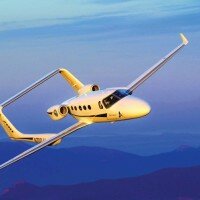 The A700 AdamJet promised to revolutionise the Very Light Jet (VLJ) business jet class by delivering exceptional performance and comfort at a fraction of the ownership cost. Modern airframe design and materials, coupled with highly efficient turbofan engines, ushered in a new era of business jet travel. But unfortunately the leader of the VLJ revolution ultimately fell on its own sword. AVIATOR takes a closer look and attempts to explain why.

The A700 AdamJet was a turbofan-powered aircraft that could be configured with six, seven, or eight seats. Developed by Colorado-based Adam Aircraft, the A700 boasted the largest cabin in its class and modular, plug-and-play functionality, customers could opt for a six-seat configuration with full aft lavatory, a seven-seat configuration with small aft lavatory, or an eight-seat configuration that maximised passenger volume. In-cabin storage was located just aft of the crew seats and outside the lavatory compartment. Baggage, including bulky items such as up to four sets of golf clubs, could be stored in the 25 cubic foot nose compartment.

Power was provided by the Williams International FJ33-4A turbofan engine, which had a thermodynamic rating of 1,568 lbs of thrust. For the A700 AdamJet, the FJ33 was de-rated to 1,350 lbs of thrust.

So, if this wonderful aircraft led the VLJ revolution at a time when the likes of Cessna had only just started to “think” about entering the market, why did the A700 AdamJet fail? In a nutshell, the company poured far too many resources into its piston-powered push/pull A500 twin and nowhere near enough into a jet that could have changed the course of history.

From the outset, Adam’s plan was to build the A700 as structurally similar to the A500 as possible, the logic being to reduce certification and production costs. Reportedly, about 80 per cent of parts were interchangeable between the two models. To that end, the all-composite A500 was deliberately overbuilt so the jet version could fly heavier and faster, and acccordingly, both models shared essentially the same fuselage, wing and tail. The A700 featured an A500 cabin stretched 2 ½ feet to accommodate a fourth row of seats.

The most obvious difference between the Adam siblings was piston versus jet power. While the A700 utilised the Williams powerplant, the A500 flew with a couple of turbocharged Continental TSIO-550 engines rated for 350 hp each.

Jets burn fuel at a much higher rate than piston engines, and Adam knew the A500’s 230-gallon tanks wouldn’t be adequate for the A700. The prototype was fitted with standard tanks, but Adam planned to boost capacity with a 100-gallon belly tank.

Flight tests had suggested cruise projections of 340 knots (Mach .60) at 38,000 feet; while fuel burn would be dramatically lower than on the previous jets. Adam Aircraft also stated that the A700 would be relatively fuel-efficient. 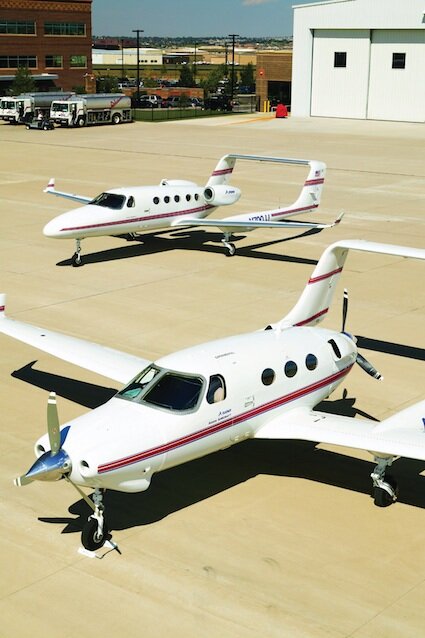 Despite toiling away for years on the A500, with only lukewarm interest, the A700’s spectacular debut at Oshkosh a few years back absolutely stole the show. Not only was the AdamJet the first very light jet (VLJ) to fly to Oshkosh, it had a sleek, streamlined look and features that its competitors could only dream about. Sure, the A700 was just a shell back then but from the time it arrived, the Adam exhibit was always the most crowded and the buzz was all about the company’s brand spanking new VLJ. The A700 had momentum, an intangible of which Adam Aircraft failed to capitalise.

Instead of doing the most logical thing of pushing the A500 to the back of the hangar and pouring all of the company’s resources into getting the A700 certified and on the market, Adam continued to tinker with the unpopular piston twin.

Often the difference between success and failure in a new market is getting there first. Cessna was just stirring on the VLJ market, Eclipse was stalled by its engine problems and all the rest were either playing with paper aeroplanes or feeling out the market. Adam had momentum on its side and the chance to win the Very Light Jet lottery.

Instead, the company decided that while the A700 was a lot of fun, it had to complete the A500 before it could commit big resources to the jet. Well, the excruciating A500 certification dragged on and on and the same old A700 shell kept turning up at the air shows. Still, hardly anyone paid attention to the piston aircraft, which, at more than US$1 million, looked pretty ordinary compared to its turbine stablemate. As expected, after so much indecision, it wasn’t long before the A700 lost the advantage of momentum; the competition caught up and soon there were other very light jets dazzling the market. When Adam closed its doors, it still hadn’t certified the A700 (for which it had hundreds of orders) and the company had sold a measly 17 A500s, only seven of which had been delivered.

Adam Aircraft ceased operations on 11 February 2008 and filed for Chapter 7 bankruptcy liquidation on 19 February 2008, prior to the certification or delivery of any production A700s.

In April 2008 Adam Aircraft was purchased from bankruptcy by AAI Acquisition Inc who indicated their intention to continue with certification of the aircraft. Industrial Investments, the Russian company that purchased Adam Aircraft, restarted work on the A700 and in May 2008 had 60 employees back at work. Industrial Investments reportedly ordered 75 A700s prior to Adam Aircraft’s bankruptcy. AAI had initially intended to certify the A700 in the first quarter of 2010, but citing the economic crisis of 2008 President and CEO Jack Braly announced on 28 October 2008 that “Flight test and other development activity have been suspended”. Braly indicated that the company’s investment team and board of directors were reviewing the economic and market conditions and would decide on a new schedule for certifying the A700.

The Federal Aviation Administration accepted the previous certification data that Adam Aircraft recorded, which would have greatly simplified certification efforts by the new company, however in April 2009 Adam Aircraft ceased operations and laid off all its staff, ending development of the A700.

In April 2011 Triton Aerospace, the new holder of the type certificate, indicated that they would concentrate on the A500 and had no plans to continue development of the A700, even though they have two disassembled examples.

After promising so much but delivering so little, one can only hope that much will be learnt from this “potentially” great aircraft’s misfortune. 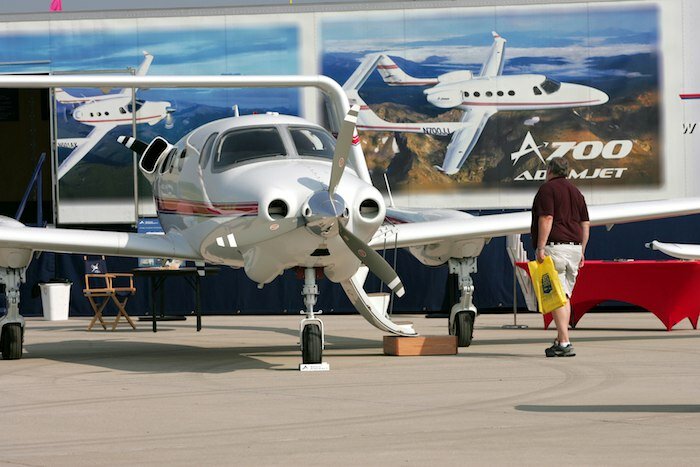