Posted by Admin on Nov 3, 2012 in Featured, Homebuilding, Recreational | 1 comment 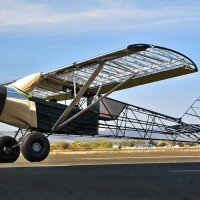 Aviator follows the trials and tribulations of a real life homebuilder. Our intrepid pioneer won’t be completing his project in six months flat; his machine won’t be flying out of the hangar flawlessly for the first test flight nor will he constantly be airborne, ferrying a group of decadent mates around Australia with a carefree lifestyle. As we all know, life gets in the way of the best made plans and, much of the time, the journey, and the decisions made along the way, are as significant as the destination.

Why Build an Aircraft?

Why build an airplane? Well, there are quite a few reasons. Some that immediately come to mind involve the following:

If you discount labour, a homebuilt aircraft will cost far less than an equivalent brand-new commercial one, and probably even a used commercial one. There is no way I could afford a commercially produced aircraft even remotely like I desire. And a secondhand old C150 doesn’t have much appeal when compared next to an aircraft that can cruise at 180kts (erm, I was thinking of the Mustang-II here!), is fully aerobatic, has great control harmony, offers fantastic views from its bubble-type canopy and on top of everything else is one sexy-looking machine!

Many homebuilts exhibit extremely high performance, again at relatively low cost. And some designs simply have no commercial counterpart; the Lancair IV-P and Viperjet for example. For sure, these are still expensive aircraft and way out of my price range – but if you had the money and wanted a plane like one of these, building would be your only option.

How many people can afford a brand-new commercial aircraft anyway? I simply cannot believe the price for a new Cessna Skyhawk! But any aircraft you build yourself is (eventually!) going to be a new one.

You can build your aircraft exactly how you want it, to suit YOU and your needs. You can do your own interior design, decide on your own paint-scheme, choose your own instruments, avionics, flight controls etc… If you are extra tall or extra small you can modify the seating and pedals to accommodate. You can build YOUR plane.

If you build your own plane under the Experimental category, you can do your own servicing and maintenance. Much cheaper! 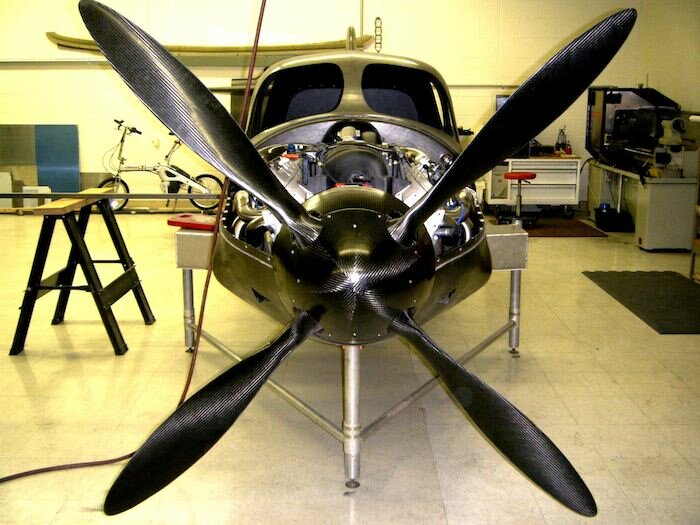 Building things is fun! I can only begin to imagine the sense of achievement and satisfaction that must result from the building and flying of your own aircraft. I can’t wait to know it for myself, firsthand.

Why Write About It?

Even though there are many other builder’s stories out there (especially RV-4/6/8 ones), they never seem to really get to grips with starting, like me, as an absolute raw beginner. I mean, what on earth did all those weird rivet codes like AN426-3 mean? What steps were actually involved in building, say, an aileron? What tools do you really need? How do people do this, that, and all the other things I had no idea about?

Many of the other articles I found had lots of pictures of the construction, but they were mostly of large completed assemblies, and there were very few pictures of how the builder had got to that point in the process. I realise now that a lot of this information is obtained by visiting other builders, watching how they do things and by asking lots of questions. There are also books – such as “Aircraft Sheet Metal” – which are extremely helpful and explain rivet codes, drill sizes, allowable edge distances and many other things which help to clear the fog of confusion from a budding builder’s mind. There is so much information in books like this that I am not going to try and present it all here. You simply have to get a book. And read it.

How Did I Get Here?

Until recently, aside from the Around New Zealand Air-Race back in Easter, I haven’t really been involved with aviation at all. However, I’ve now got back into the swing of things and have been getting some aerobatic training in a Victa Airtourer. This has been heaps of fun and I’m about three hours away from being signed off for aerobatics in my logbook. In fact, it’s been so much fun that I don’t think I can wait to complete my homebuild. I feel like I need a project that has a faster return on investment, in both time and money.

This winter just passed, I hiked to Mt.Rufus (in a world-heritage area) to go snowboarding with my brother. After six hours of slogging along in snowshoes I was definitely thinking about alternate ways to get to remote places like this. A helicopter seemed like a very good idea. The more I thought about it, the more I decided that a light helicopter would be an ideal aircraft for getting around Tasmania in. Distances aren’t very great here, so the lower cruising speed isn’t too much of a problem, and much of the terrain is pretty rough. After some (minor) engine hiccups in the NZ air-race, it occurred to me that I would rather have an engine failure in a helicopter than a fixed wing aircraft, over most of the mountainous terrain over there. And Tassie is, in many ways, a scaled-down version of New Zealand. 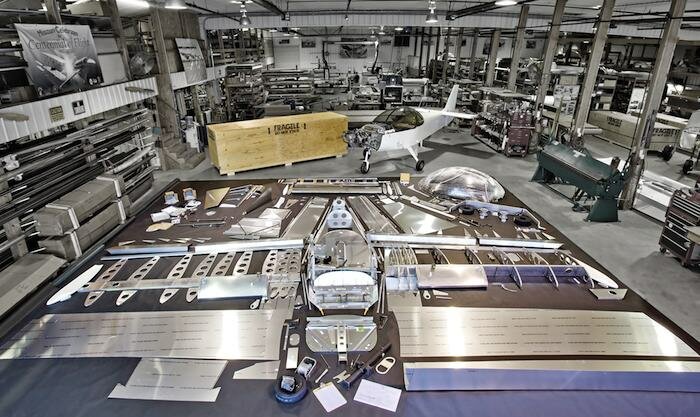 So, I began looking at kit helicopters. This was a lot easier than researching fixed-wing kits, because there are a lot less helicopter kits to choose from! Primary candidates were the Mosquito M80, the Rotorway Exec162FA and the Helicycle.

The Helicycle looks like a great machine (it’s even turbine powered) and is affordable, but it’s only single place. Besides not being able to carry a passenger, this means I would have to get my license in a commercial heli such as a Robsinson R22. That is a very expensive proposition. There is also the “problem” that the manufacturer won’t supply the main rotor bearings until a) you have a helicopter license, and b) they come and personally check out your newly built Helicycle, install the bearings and test fly and rig it for you. I think this is a great safety measure, but it becomes problematic when you live on a different landmass to the manufacturer.

The Rotorway Exec is by far the most popular kit helicopter on the market, and with good reason. It looks good, has had years of development and is pretty much the best two-place light helicopter available. I was contemplating selling my partially completed fixed wing kit and buying the first stage kit of the Exec.

The Mosquito M80 sounds fantastic. It is lighter again than the Exec and thus uses a smaller engine. With the same capacity fuel tank it has a far greater range, a very similar useful load and higher performance numbers. I think it also looks a lot better. This helicopter really had my heart racing. I love it. The big problem is… it isn’t available!

I gather Mosquito ran into some financial troubles, and then had a falling out with the brothers who were actually designing the aircraft, and now it’s all on hold. Very frustrating, since a flying prototype does exist! Along the way Mosquito had to design their own engine for the helicopter and they are now pursuing this development, but initially for the fixed-wing market. Their engine will compete in the market with the Jabiru 2200 4-cylinder 80hp engine.

So, what to do? Should I persevere with the Mustang I have partially built? Should I give up entirely on kit aircraft and try to buy a completed airplane? But what? What, what, what, should I do? 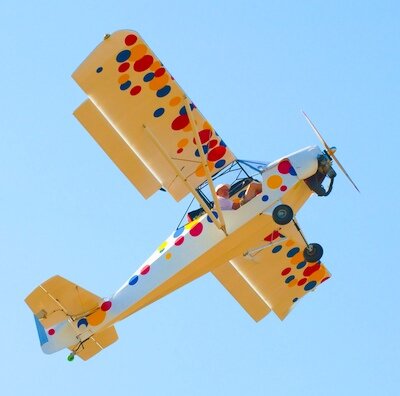 And then, my brother John mentioned that he might be interested in getting his ultralight license, if it would allow him to fly back to King Island. We weren’t sure of the regulations about flying over water in ultralights, so we took a trip out to the local ultralight training school at Georgetown. It turns out that flying to King Island is definitely possible, and so John is interested.

Hmmmm, thinks I. Perhaps John and I could build an ultralight together. Ultralights are simpler, faster and cheaper to build, and operate, and if I could go halves in the costs, and have two people building… it should all happen a lot more quickly. Then I would have something to fly, and I wouldn’t mind taking a lot longer to build the Mustang…my “real” aircraft.

Then I remembered the Sonex. I had seen the Sonex design years ago when making the decision to build the Mustang. Why on earth I overlooked it then is beyond me. I suppose it was because it’s an “ultralight”, and it isn’t as fast as the Mustang or the RV’s. I revisited the Sonex specs more seriously, and wow, this airplane sounds amazing.

It’s a simple design, and is built predominantly with blind rivets. From all accounts the kit seems very builder-friendly, with all skins etc. laser cut to the exact size and shape, with all the holes predrilled. It is built from 6061 alloy which is much more corrosion resistant than the Mustang’s 2024 material, and they recommend against using any sort of corrosion proofing at all. How simple can it get? The average build time for the entire aircraft from the kit is 500-700 hours.

Given my impatient personality, as a first-time builder, I’m now thinking I picked the wrong aircraft.

I also feel that the Sonex is a more fun airplane. It is much cheaper to operate, stalls at a much lower airspeed, seems much more forgiving and is better suited for simple aerobatics.

Spins in the Sonex seem quite easy and safe, but for most M-II pilots a spin is a nightmare they never want to experience, and nobody seems to actually know if they will recover from beyond three or four turns! After having aerobatic training in a Victa Airtourer, and often ending up in a spin after a botched manoeuvre, I definitely want an airplane with good safe spin characteristics.

To top things off, I have discovered that there are three other people in Tasmania building Sonex’s, and one here in my hometown of Launceston. I went and visited him last night, and came away very impressed. 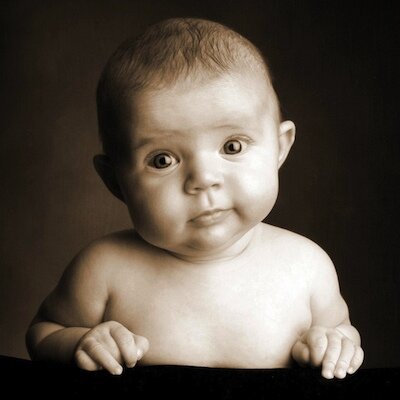 So that’s where my thinking is at the moment. I’m pretty certain that I’m going to shelve the Mustang for the time being, and start on a Sonex, hopefully in conjunction with my brother. It seems a bit sad to shelve the Mustang but hopefully it will only be a lengthy pause. The M-II is a great aircraft, and I’m lucky that my dad owns one so I can still get to fly it occasionally, but building one is just too big a job for me at this point in my life.

This is not to say I think the Sonex will be easy, just easi-er! I’m not expecting it to simply slot together, but it is definitely a simpler, cheaper aircraft.

So tune in next time as I prepare for the build.