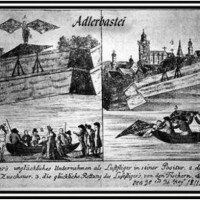 Albert Berblinger, a German tailor, worked for years inventing a hang glider by watching the flight of owls. People made fun of him and he was threatened with exclusion from the guild of tailors and ordered to pay a large fine for his working outside of the guild. Nevertheless he invested his whole income in his project. He attempted his first flight, in the presence of the king’s three sons and the crown prince of Bavaria, on May 31st 1811. Berblinger waited so long for a good wind, that a policemen finally gave him a push and Berblinger fell into the Danube. Other versions of this account have no mention of the policeman and claim that the difference in temperature over the cold Donau  limited thermal updrafts and therefore the glider failed to lift. He survived and was rescued by fishermen. In 1986 it was proven that Berblinger’s glider was capable of sustained flight, but it was almost impossible to cross the Danube even with most modern gliders.